One for the Birds 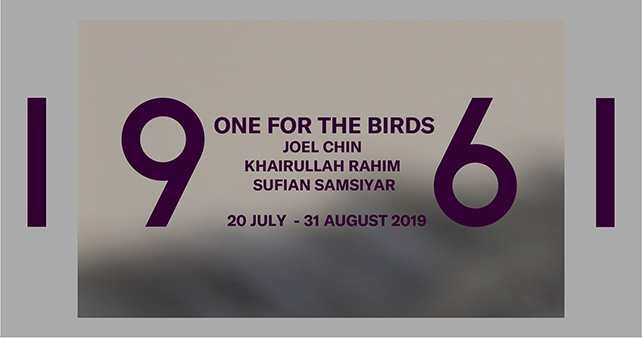 One for the Birds brings together three Singaporean artists, Joel Chin, Khairullah Rahim and Sufian Samsiyar in this group exhibition as they address the latent qualities of objects in their respective practices. Inspired by the idiom of the same name with the exhibition title, the presentation of newly developed works addresses notions of fairy tale, fiction and falsehood primarily through the use of objects as material and/or medium.

Conceived during his recent residency at Salzburger Kunstverein in Salzburg, Austria, Khairullah Rahim’s new series of mixed media assemblages sees the continuation of the artist’s interest in spaces of intimacy. The formation of the assemblages take visual cues namely from the banks of the Salzach river which is a popular landmark providing enchanting views of the city, bird-watching spots and is also synonymous with the Love Locks Bridge. This century-old tradition has lovers inscribing a lock with their initials, affixing the lock to a popular footbridge, and tossing the key into the river to symbolize their unbreakable and eternal love.

Kamakrazee by Joel Chin is an ongoing project revolving around a fictional retro futuristic narrative, set in a post-apocalyptic landscape where the only human survivors are the stereotypical “outcasts/rejects” of society. In this narrative, Japanese biker gangs called the “bosozoku (暴走族)” are the subjects of focus, imagining how they adapt to this dystopian landscape. The title borrows itself from a line in Mad Max: Fury Road, in which a rally cry was given to a group of “war boys” as they set out to retrieve what was stolen.

Skylight bedroom in CBD & End of Orchard + WIFI is part of an ongoing project by Sufian Samsiyar. The project interrogates and employs texts, images and objects from online and offline marketplaces that offers temporal lodging or acquisitions on real estate. In this iteration, he employs and re-configure these signifiers into a different paradigm, one that is distanced from its geographical context of lodging and enquires on the accuracy of such descriptions for such spaces.