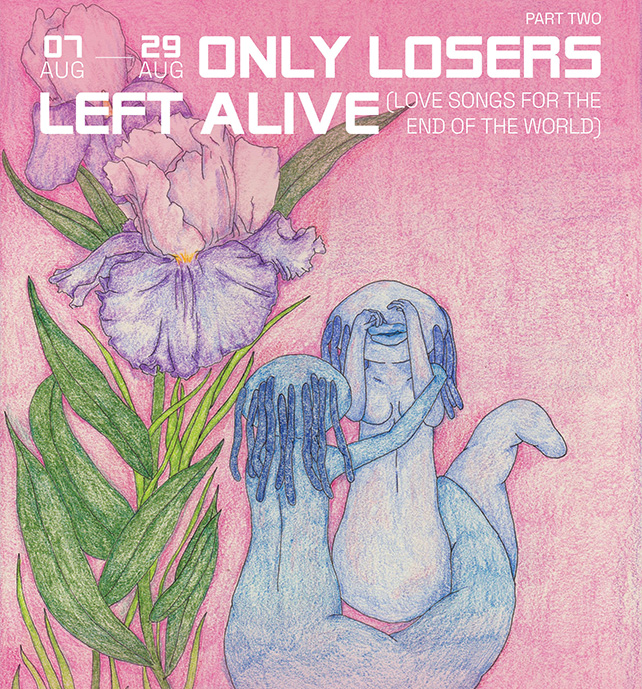 only losers left alive (love songs for the end of the world) is an exhibition featuring a roster of local and locally-based artists. Occurring in two parts, the exhibition takes its visual and conceptual cues from cinema, featuring tableaux populated by objects, images and sounds that evoke the moods of a universe ravaged by unknown forces. This is a show that derives its tone and tenor from science fiction, a conjuring of the future that derives sensorial pleasure from the act of retroprojection. Providing the real-world context for the mood of despondency is, of course, the current pandemic, and the climate of fear, uncertainty and paranoia in which the global population has been mired in. Where the first instalment focused on human bodies, technological objects and an almost monochromatic palette, the second half of only losers left alive (love songs for the end of the world) foregrounds instead bright and pastel colours, and visual motifs centred on flora, fauna and alien shapes – almost as if human presence has now departed the equation, and only a post-human world remains.

As in the first half of the exhibition, Singaporean filmmakers and sound artists, Mark Chua and Lam Li Shuen, have produced several songs that provide a melancholic, sentimental soundtrack for the exhibition. Victoria Hertel’s work, Short Circuit (2021), a site-specific, floor- and ceiling-based immersive installation, remains in the show. Sarah Isabelle Tan’s camera-less photographic images are captures of local flora, while Juria Toramae’s hypnotic, AI video piece presents fictional, changing morphologies based on various marine species and terrains found in Southeast Asian waters. Geraldine Lim’s series of drawings in colour pencil and pen fantasise an alternative world where the figures in her work are amorphous, with shifting colours, limbs, protrusions, organs and wounds, reflecting on the body, gender and sexuality. Masuri Mazlan’s installation of sculptures and lights are inspired by his personal fear of contamination and infection through sexual intimacies, and uses latex as a metaphor for protection, as well as its approximation of the textural quality of skin. Samuel Xun’s soft sculptures likewise represent experiments in colour, materiality and form; his personal sensibilities evince qualities of campiness and kitsch, and their alien-ness. Finally, Georgette Goh’s installation is a botanical one, incorporating fresh specimens, and foraged and artificial floral and botanical elements.