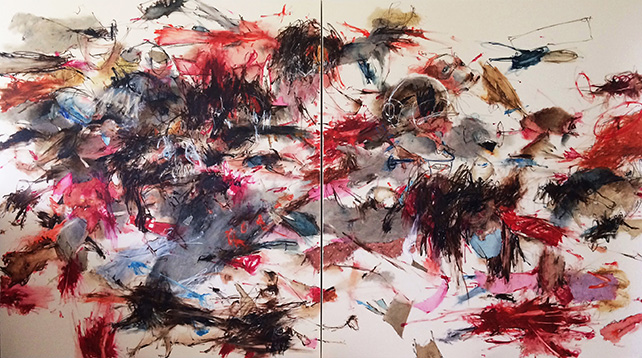 “Our Nature: Ay Tjoe Christine + Zai Kuning” is a duo exhibition by two of Southeast Asia’s most important artists. While one explores emotional terrain that is innate within our human nature, the other is concerned with our natural instincts – the ways that we naturally adapt to changes in our environment. The exhibition will present recent and new works by both artists.

Indonesian artist Ay Tjoe Christine (b. 1973) is known for her intricate layered paintings. Ay Tjoe began her career as an artist particularly interested in dry point technique. Later on, she transitioned from dry point on paper to painting with oil bar on canvas, without losing a prevalent principal in dry point technique – the balance in positive and negative space. Ay Tjoe’s paintings are full of colourful shapes and strong strokes, giving a sense of distortion and disorder. She is largely intrigued by human emotions and hence in her work, she often expresses inner feelings such as melancholy, struggle, pain and happiness. Often, only fragments of her subject matter manifest visually, allowing for a strong sense of abstraction.

Singaporean multidisciplinary artist Zai Kuning (b. 1964) continues his ongoing exploration about people in relation to their environment. In these most recent drawings, Zai ponders over the relationship between human beings and the sea. Homelessness is a predicament that many people face today as they are tortured by unspeakable violence and murder: the victims of war in countries of Middle-East and Africa, and the much persecuted Rohingya people in Myanmar. When people run away from destroyed hometowns, the first direction is towards the sea. The sea is a symbol of hope, but the sea is not a romantic holiday. Its buoyant water serves life with the promise of arriving at new shores, yet its saltiness, vastness and unfathomable depth takes life without mercy. Knowing well the dangers of the sea, the desperate will still traverse its treacherous waters as a last ditch effort to search for a new lease of life.

The plight of these involuntary migrants can be closely associated with the difficult lives of the Orang Laut (sea gypsies), the region’s oldest inhabitants who have lost their natural homeground to political divisions and economic development. The Orang Laut is a constant source of Zai’s creativity and spirituality as they represent one of the most honest and free-spirited people who possess nothing but all there is inside them. They are a life form that no written book can adequately contain. In Zai’s drawings, he uses recurring themes and symbolism that are mostly representative of the lives of the Orang Laut, for example boats, bodies, fishing lines. Through their stories, Zai uses his drawings to express the various similar aspects we experience in our lives as human beings.