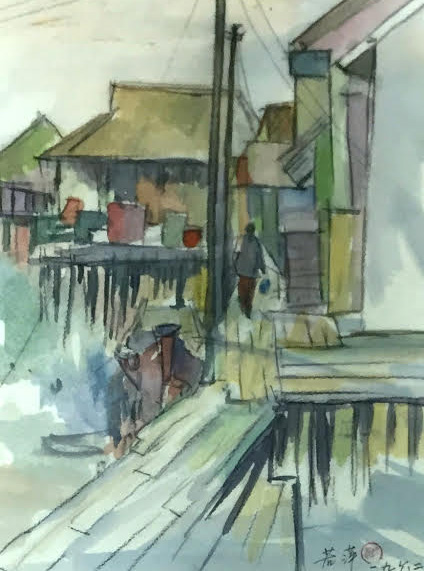 Born in China in 1908, Kuo Ju Ping moved to Malaya as a teenager and was among the first graduating batch of art students at Singapore’s Nanyang Academy of Fine Arts in 1940. He was also a founder member of the Penang Chinese Art Club in 1936. During his lifetime, he was praised for his versatility and technical competency. He remains well known today for his realist-impressionistic oil and watercolour paintings of Malayan scenes.

Those familiar with regional history and the development of Malayan art during the early 20th century would no doubt be aware of the cultural impact upon colonial Malaya (which included Penang and Singapore under the British empire) that occurred as a result of the political turmoil and cultural movement in China. This period saw an exodus of Chinese immigrants (including intellectuals, artists and businessmen) to the Peninsula. After the 1950s, post-independent Malaysia and Singapore would continue to share an ineffaceable kinship in the development of an overarching artistic lineage established by sizeable groups of artists who were born and academically-trained in China, but subsequently relocated to different parts of Malaya and undertook significant roles in shaping the respective art scene and education.

In Singapore, notable Chinese immigrants who rose to become influential pioneer artists include Lim Hak Tai, Cheong Soo Pieng, Chen Wen Hsi, Liu Kang, Georgette Chen and more. In a way, Kuo Ju Ping’s profile may be contextualised in a similar vein, except to be projected along the development of the art tradition in Penang, and a wider Malaysian narrative. He is widely credited as among the influential pioneers of Malaysian Art along with Abdullah Ariff, Khaw Sia, Tay Hooi Keat, Chuan Thean Teng, Lee Cheng Yong and several others. His paintings are collected by National Art Gallery, Kuala Lumpur, Penang Museum and The Art Gallery, Penang.