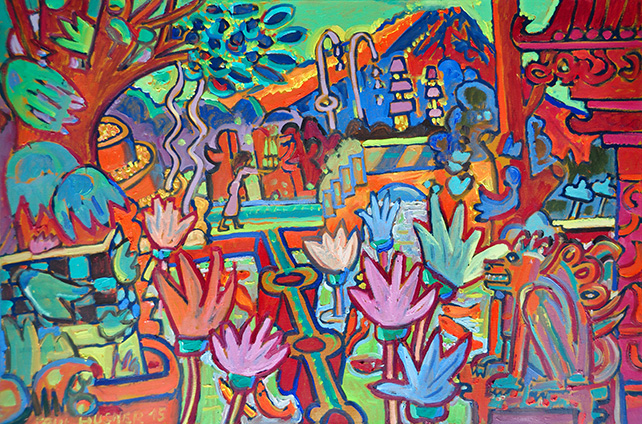 Born 1942 in Basel, Switzerland, the award-winning artist Paul Husner has come to be known as a master of Indo-European art. He has enjoyed an illustrious education in the realm of art and design. As a young adult, he was trained in colour retouching for book printing; he worked for Birkhauser, a publisher of books on famous artists. He also attended courses on classic and modern art history at the local Kunstmuseum under its director, George Schmidt. After moving to Amsterdam, he proceeded to pursue studies in graphics and painting at the Gerrit Rietveld Academie. He took master classes in painting at the Rijksakademie van Beeldende Kunsten, where he later served as professor for nine years.

Husner is not the first among the number of artists who have been enraptured by the beauty of a foreign island. In 1983, he moved to Ubud, Indonesia. This act would become a defining moment in his artistic career, informing his practice for at least the next three decades; from the 1990s onwards, his canvases, viewed together, chart a visual map of his favourite spots on the island.

Husner likens his painterly process to that of a musician’s; the synthesis of different shades of colour are akin to the arrangement of musical notes to form a symphony. He is, indeed, a maestro in using vibrant, contrasting colour and skilful line work, to compose, rather than simply create.

In his second solo show with One East Asia, Husner will show 17 new works featuring select scenes of Bali. Among others, this collection portrays images of Jatiluwih, known for its beautiful rice terraces, and the Beringin tree (‘weeping fig’), another fond subject of his.