Phantoms and Aliens | The Invisible Other (Chapter 3) 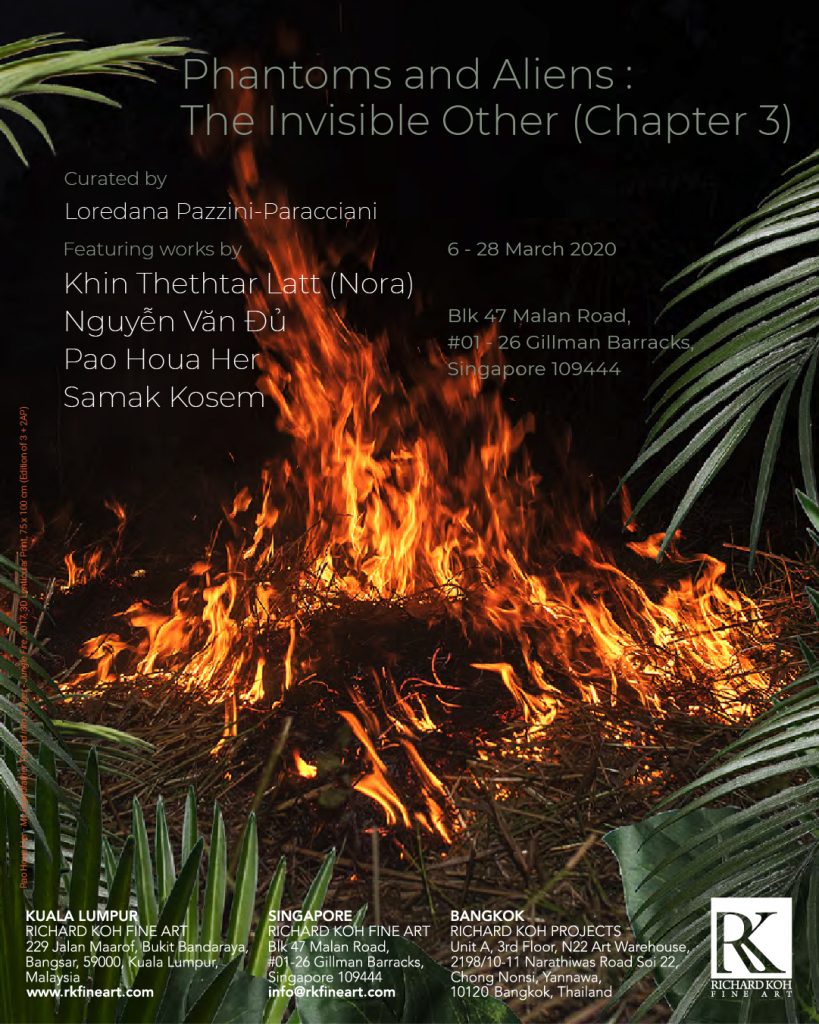 Taking the lead from pervasive beliefs and superstitions in Southeast Asia about otherworldly beings, Phantoms and Aliens | The Invisible Other broadens the perception of phantom as invisible spirit to explore another, subtler dimension of invisibility, that is, social invisibility originated in discrimination and alienation. Featuring works that span documentary photography and oral history, to painting, mixed-media and video installations, the overarching focus of the exhibition is to consider the invisible other in society: the people, or communities, that live on the margins because of ethnic, religious or cultural differences. These individuals are but phantoms, alienated from the wider society – they are invisible, yet, they exist.

By migrating from the inside out in the attempt to map alienation from multiple angles, Phantoms and Aliens | The Invisible Other is devised as a triptych unfolding across Richard Koh’s three galleries located in Bangkok, Kuala Lumpur and Singapore. Taking the form of a chapter at each location, the three chapters combined are intended as interconnected chambers to share knowledge in relation to specific concerns of life at the periphery. By osmosis, each chapter complements the other in a mutually informative and experiential manner.

Specifically, the Singapore chapter focuses on everyday discrimination and imposed suffering, through seemingly prosaic activities. Pao Houa Her’s photographic installation My Grandmother’s Favourite Grandchild examines the artist’s relationship with her family, with whom she relocated to the United States from Laos as Hmong refugees after the Vietnam War. Pot Pagoda by Khin Thethtar Latt takes its inspiration from the village Mrauk Oo in war-torn Rakhine State. In her installation, the pot becomes a symbol, a way to imagine an alternative life to daily discrimination. The Slaughterhouse paintings by Nguyễn Văn Đủ portray crucial moments, and metaphorical allusions, to the daily butchering of cattle where sacrifice is upheld against vulnerable beings.
Complementing the exhibition through the intersection between art and anthropology, are ethnographic materials that encompass video, field notes, photography and text. Titled Borders re/make Bodies: Chiang Mai Ethnography (2017- ongoing), Samak Kosem’s doctoral research focuses on assumptions about masculinity and gender perceptions of male migrants and transborder individuals in Chiang Mai through the critical framework of body politics.