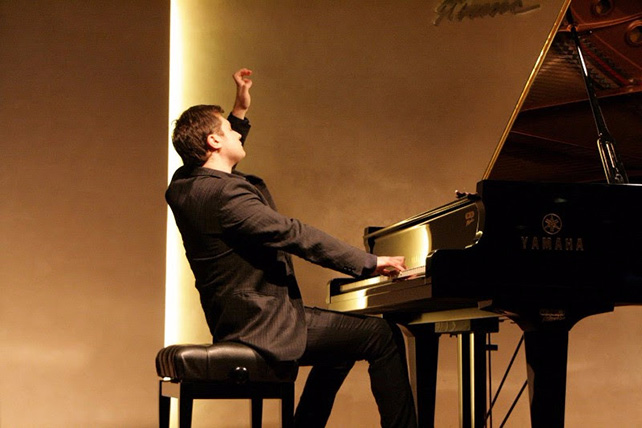 Nazareno Ferruggio is considered one of the most refined living Italian pianists having graduated from the Niccolo Piccini Conservatorium of music in Bari (Italy) and after having completed a postgraduate course at the Musikhochschule Mannheim (Germany) in Ragna Schirmer’s class; he finished his studies in the Musikhochschule Bern (Switzerland).

In 2006, he had his debut at Carnegie Hall in New York. In 2007, he received the Liszt Special Prize at the 8th Grieg International Piano Competition in Oslo. In 2009, he won the first prize at the International piano Competition ”Premio Valentino”. In 2007, he toured extensively in Indonesia and the following year he did his debut in the Wiener Saal in Salzburg. Ferruggio has given concerts and recitals in New York, Mexico City, Sydney, Melbourne, Jakarta, Oslo, Copenhagen, Stockholm, la Valletta, Milan, Lima, Barcelona, Innsbruck, Venice, Hong Kong, Rome, Cheong Ju, Hamamatsu, Little Rock, Cologne, Geneva, Amsterdam, Guatemala, Mannheim, Berne and Bari. He has been soloist with ICO Orchestra Provincia di Bari, ICO Orchestra della Magna Grecia, and Malta Philharmonic Orchestra, Orquestra Sinfonica de Michoacan.

Corinna Chang is a pianist and a lecturer as well as the CEO of Klassique Musik. She had spoken at the World Book Fair and performed with members of the SSO. Corinna was featured in magazines such as Young Parents and Her World. Furthermore, Maestro Chang was awarded with the promising SME 500 Award in 2012 and the Business Gurus Award in 2013.

Klassique Musik was established in 2005 and is one of the premier music schools in Singapore. Klassique Musik has an experienced team of teachers from Russia, the United States, Bulgaria, Taiwan, Indonesia and Singapore.