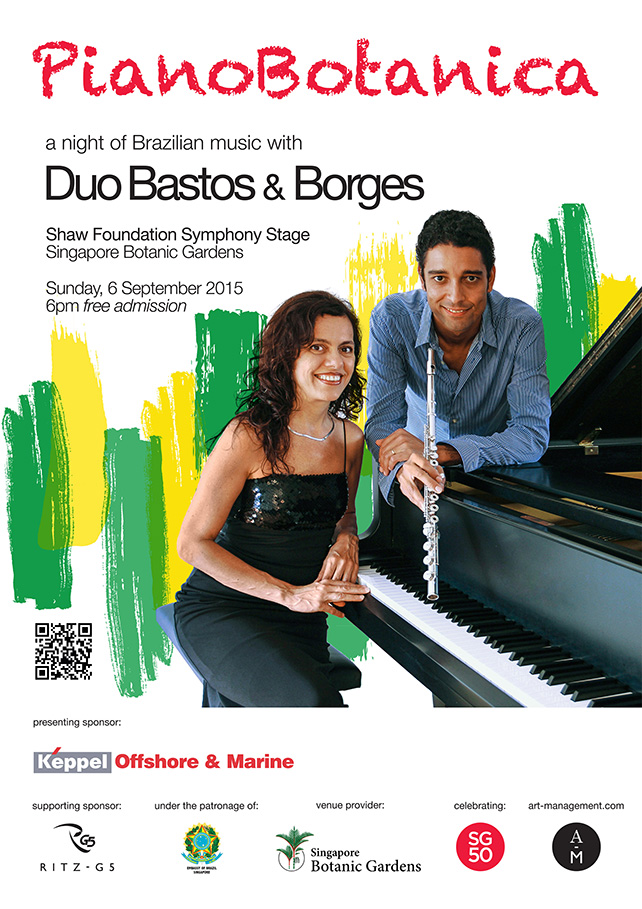 After two very successful editions, the free concert-in-the-park PianoBotanica will be back at the Singapore Botanic Gardens on Sunday, 6 September 2015 to celebrate the friendship between Brazil and Singapore on the latter’s 50th year of independence.

Sponsored by Keppel Offshore & Marine and supported by Ritz-G5 and the Embassy of Brazil, PianoBotanica has starred globetrotter maestro Brazilian pianist Caio Pagano and Singaporean King of Swing, Jeremy Monteiro. Turnouts at the concerts have been amazing, with 3,000-strong crowds attending both concerts. Adding a boast, President Tony Tan and his wife turned up to enjoy Jeremys jazz renditions.

This year, fronting the concert in the park is Brazilian Duo Bastos & Borges, who have performed across the globe for many years. The duo comprises flutist João Bastos and pianist Yara Borges, both of whom received classical training at top music institutions in Europe. They have performed extensively across Europe with a repertoire of both classical and popular Brazilian music, and performed in Singapore in 2013 upon invitation by the Embassy of Brazil.

Set in the lush and newly awarded UNESCO World Heritage Site Botanic Gardens, this musical recital is bound to set feet tapping, as audience relax amongst the greenery. People are also more than welcome to picnic in the park, or even engage with a few football kick-abouts before and after music starts.