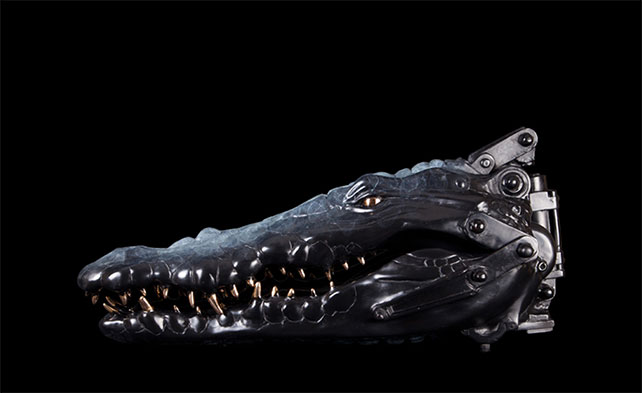 Opera Gallery presents Pierre Matter, well-known for morphing mechanical and organic forms that seamlessly integrate into a single being. Matter questions and explores the influence of technology upon human existence and nature, which can be seen from his creation of hypothetical hybrids of animals and machines, and his juxtaposition of baby-like figures with such hybrids.

Technology as an extension of the human faculty is not a novel theory. Technology is essential in our daily lives and has become so deeply embedded in our being that they have become very much an extension of the human body. In this post-digital, post-internet age, the rise of Artificial Intelligence is disrupting theories on technology as part of the human faculty. With self-learning systems, the idea that machines have the autonomy to function independently without humans is both terrifying for some and intriguing for others.

“We live in a transitional epoch that makes and will make appear in our reality monstrous hybrid beings from mythology. Even the cows of the mountains are only milk machines.” – Pierre Matter

At the same time, the development of robotics has prompted many to consider the hybridization of machine and human. Matter depicts the mechanized as extensions or prosthetics that seamlessly integrates into natural forms, showing the viewer the harmony that now exists between humans and materials. Matter counts artists like Enki Bilal, David Lynch, Hans Ruedi Giger, Alejandro Jodorowsky, Dali and Jules Verne among his main influences, with their works revolving around an increasingly imaginary world populated by machines.