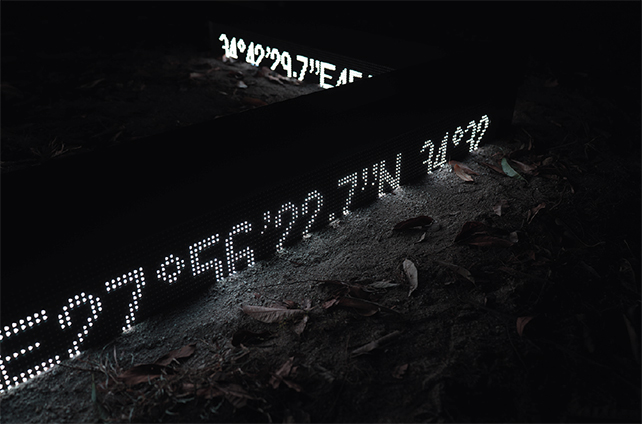 Power Play is a newly established independent biennial festival that explores the manifold dimensions of power through the playful possibilities of contemporary art. The inaugural edition titled Invisible Lines, invites over 40 international and local artists from 18 geographical locations to come together as citizens of agency: exploring, questioning and subverting the invisible lines of power as experienced through sociocultural, socioeconomic, and sociopolitical narratives within our everyday lives. Audiences are invited to grace the fully immersive digital festival, which will feature an exciting array of programmes including performance art, visual art exhibitions, film screening, artist talks and workshops, as they are seemingly transported from anywhere in the world to our festival’s sites from 23 October to 8 November 2020 through a mesmerising 360-degree viewing experience.

Over at 20 Depot, Anthony Chin reconstructed a ticker display typically used in financial trading into an installation titled Point 20 Silver, which broadcasts 138 geographical coordinates where official territorial disputes have occurred to capture the perpetual power struggles in our contemporary world. Exploring the complexity in relations revolving around the military bases in Okinawa, artist duo Kyun-Chome (Japan) created a documentary Making a Perfect Donut, which features a candid quest for different people to combine an American donut with an Okinawan donut through the fences of the base camp as they are being interviewed. Davis Birks (Mexico) folded dollar bills into origami pyramids to form the shape of an Abrams tank of war in his installation Empire (Tank) as a way to stimulate discourse about the ramifications of invasive military power. Adding to the mix is Veronyka Lau (Singapore)’s unorthodox parody of a world leader giving an electoral speech in Vote, as audiences are invited to cast a ballot in an imagined dystopian future.