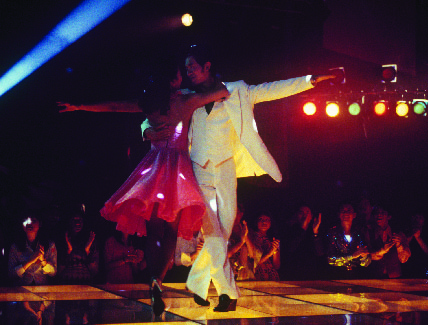 Get your picnic mats and snacks ready! Head on down to the Esplanade Concourse and enjoy this movie night, featuring three short Singapore films, followed by feature film, Forever Fever.

The story of a girl who navigates the changing landscapes of Singapore from the late 1960s to the present.

Ah Tee, a pork seller at the market, constantly abuses his wife Ah Huay. Despite his charming ways at the market, he has an inferiority complex and an inexplicable rage. One day, Ah Huay decides to protect herself against him.

When three best friends with the combined age of 180 reminisce about their hey days at their friend’s wake, they decide to do something wild!

Forever Fever takes you back to the ’70s when disco first hit Singapore. Hock, a grocery clerk, catches the disco bug after watching Saturday Night Fever. In a bid to buy his dream bike, he enters a dance competition that’s giving away cash prizes. Taking his pal, Mei, for nightly practice lessons, feelings start to develop between the two while at home, his brother reveals a personal secret that leads to a family crisis.

Glen Goei began his directing career as Artistic Director of Mu-Lan Arts, a theatre company he founded in London 25 years ago. During his multi-award winning tenure, his productions garnered acclaim throughout the United Kingdom and worldwide.

His first feature film Forever Fever (aka That’s The Way I Like It) which he wrote, directed and produced, premiered at the Sundance Film Festival in 1999. Miramax bought the North America and UK distribution rights and it became the first Singapore film to achieve a worldwide commercial release. In 2009, he released his second feature The Blue Mansion.

In between developing new ideas for film, he continues his work in theatre as the Associate Artistic Director of W!LD RICE. His productions include hits such as Hotel, Public Enemy, Boeing Boeing, La Cage aux Folles, The House of Bernada Alba, and his internationally lauded interpretation of The Importance of Being Earnest.