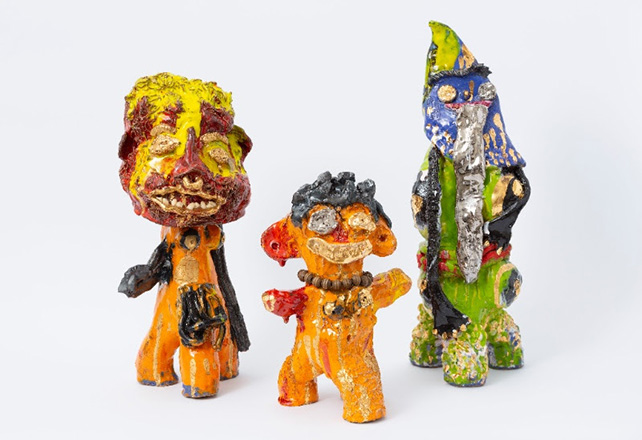 Known for his adventurous and unorthodox approach to clay, Nithiyendran has developed a unique sculptural language which has earned him an international reputation as “the bad boy of ceramics”. Trained in painting and self-taught in ceramics, Nithiyendran’s sculptures are hand-built using traditional ceramic techniques such as coiling and slabbing. His adherence to tradition ends at the firing stage at which point the artist employs an array of experimental glazes and lustres. With a sense of irreverence, Nithiyendran adorns his figures with unexpected objects such as garden hoses, hair bracelets and false teeth, reflecting his equal disregard for heteronormative gender binaries.

His influences can be traced, in part, to the Shiva Linga, an abstract representation of the Hindu deity Lord Shiva. Layered with cultural references and evocative imagery, the phallic forms present in his work are paired with cartoonish, stirring facial expressions. Beneath this visual cacophony is a penetrative (pun intended) glare at society’s fundamental irony: that despite the phallocentricity of sport, politics, advertising and the entertainment industry, the sight of a phallus still shocks. Redressing the sexualisation of the female body and the fundamental representational imbalance authored by the deep-seated male gaze, Nithiyendran responds with an excessive, exuberant and rambunctious laughter in clay.

R@MESH: Volume II is an expansion of the bold proclamations of Nithiyendran’s institutional shows which have since evolved into a self-reflexive investigation of relationships and power, holding a mirror to the world at odds. Traces of Nithiyendran’s personality are embedded, as sartorial flamboyance, but also as self-mockery. Self-portraiture, according to the artist, is a theme that runs through all his work, toeing the line between narcissism and self-parody. Playing along with the idea of the artist as a brand in today’s age of screen culture, Nithiyendran’s laughter is truly contagious.