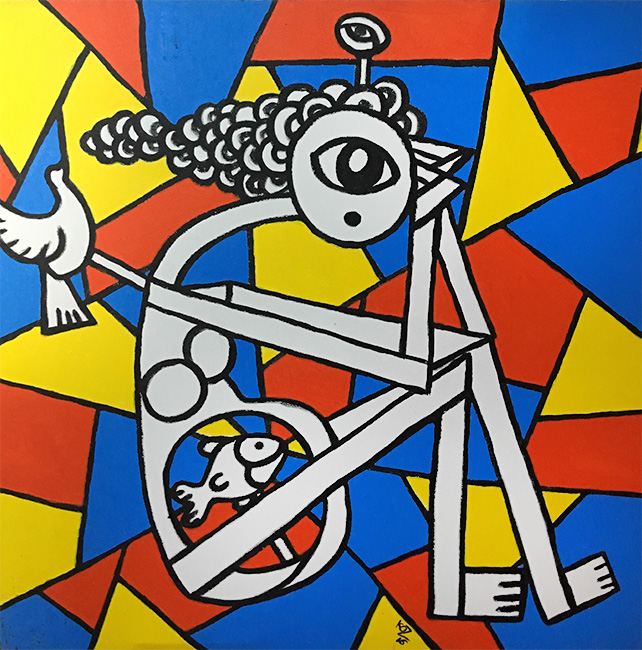 Born in Shan State, Ko Z belongs to the Kachin ethnic minority who lives in the northernmost State of Myanmar. In addition to its strategic location, the Kachin State is important for its natural resources, which include Jade, gold mines, timber and hydropower. Since the independence in 1948, the Kachin population has endured a long state of civil war as well as many internal displacements of persons (IDP). The ceasefire agreement, which was maintained from 1994 to 2011, broke down after the Myanmar military launched a surprise offensive in June 2011. Since then, 100,000 people have been displaced.

“Red Peace” is an exhibition that encompasses paintings on canvas, photos and an installation. Kachin means “Red Earth” in Kachin language. With “Red Peace”, Ko Z strives not only to keep memory of the tragic history of the Kachin people but also to express his hope for peace. The Kachins were animists. They believed in spirits called nats. In the 19th century, they were converted by American protestants and European missionaries and today most of the Kachins declare themselves Christians. “Red Peace” paintings look like stained-glass windows. However, they are also inspired by the traditional patterns of the totem poles, which are erected during the Kachin Manau Festival. A Manau festival is traditionally held to mark various important community events such as weddings, funerals, declarations of war and victory celebrations. Today, it is also organised to keep tradition alive and to call the Kachin diaspora together. The festival includes music, dancing, contests, and performances of the special Manau dance.

In “Red Peace” series, the artist strives to express a mystic connection between animals and female bodies: doves and fishes ared used as recurrent symbols while women are alternativelty represented dressed with the traditional Kachin costumes in hieratic postures or naked in a way that symbolizes motherhood. In some artworks the dislocated bodies express the suffering of the Kachin nation. However, primary bright colours are chosen to express the joy of life.

In this series, Ko Z successfully appropriates visual elements borrowed from European modernism, in particular from cubism. The female bodies remind us of some paintings by Picasso, while the stained-glass window background seems inspired by Cocteau or Chagall and tranports us in an imaginary cathedral out of time and space. However, this series is deeply rooted in Kachin pictural tradition and celebrates Kachin identity.

Opening Night: 18 January 2018, in presence of the artist