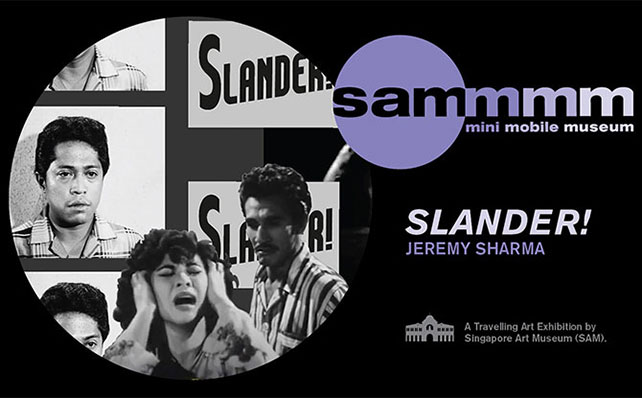 Singapore Art Museum (SAM) launches its fourth exhibition of the SAM Mini Mobile Museum, featuring Slander! by multidisciplinary artist Jeremy Sharma, a presentation of his research into Singapore’s films and popular culture of the 1950s and 1960s. The exhibition will open at Woodlands Regional Library from 9 June to 25 July 2021, and travel to Jurong and Tampines regional libraries on 28 July and 15 September 2021 respectively. The SAM Mini Mobile Museum is a travelling art exhibition held in partnership with the National Library Board, that introduces the multifaceted nature of contemporary art through a selection of artworks from SAM’s collection, adapted for non-museum spaces and created by Southeast Asian artists.

The exhibition’s title references the 1959 film Korban Fitnah (Victims of Slander), a central feature in Sharma’s 2017 installation A White, White Day — now part of the museum’s collection. With A White, White Day, Sharma extracted video data from the film and translated these signals through LED nodes in the lightboxes, as a means of deconstructing the cinematic image and to point towards the haziness of our memories.

As an artist and musician, Jeremy Sharma’s works and experiments look into scenes and places through the lens of modernity, while employing elements of voice, light, atmospheres, film, music, movement and architecture. His practice examines our relationship with the information age and is situated within the everyday. More recently, the artist has produced installations involving sound, performance, and moving images, with a particular interest towards cultural archives.

This can be seen in the making of Slander!, where Sharma revisits a range of films shot and produced in Singapore from 1958 to 1963, the post-war period between the heyday of Singapore’s film industry and Singapore’s eventual independence. The films that emerged from this golden era of Malayan cinema helped sustain the region’s postcolonial search for a national identity and future, as well as its negotiations with the order of modernity at large. As such, the films often reflected a palpable sense of social ferment and restlessness.