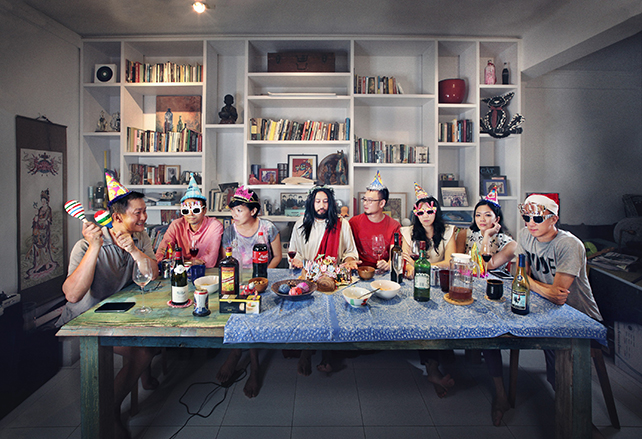 Best known for his parodies of iconic artworks, Singaporean artist Eugene Soh’s humanistic narrations of contemporary life spotlight familiar and conventional conditions of life in Singapore, taking ordinary encounters and coaxing them into photo compositions steeped in satire. The “Singaporeanizing” of the familiar is Soh’s speciality, where he imbues popular narratives with a uniquely local context. In 2015, Soh’s work earned him a Finalist spot in the Sovereign Asian Art Prize. 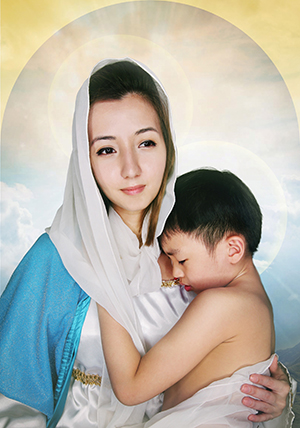 This new photographic series presents imagined scenarios occurring in relation to the biblical prophecy of the Second Coming. Impervious to traditional understandings of the religious belief, Soh interprets the prophetic reappearance of Jesus in multiple scenarios within the context of contemporary Singapore. Predictions include the messianic figure celebrating his birthday in the Lion city, an awkward moment at best as partygoers contemplate its apocalyptic undertones. In Madonna And Child, the multi-racial make up of Singapore is conveyed in the portrayal of Jesus and his earthly mother as possibly Asian–a tongue-in-cheek contradiction to common Western depictions of the religious duo. Soh states, “This series is a direct interpretation of my favorite biblical narrative–the apocalyptic one. Although the Bible I grew up reading says that Jesus will return, we were never told when nor where, and this is my take on all possible predictions of him returning to earth in Singapore.”