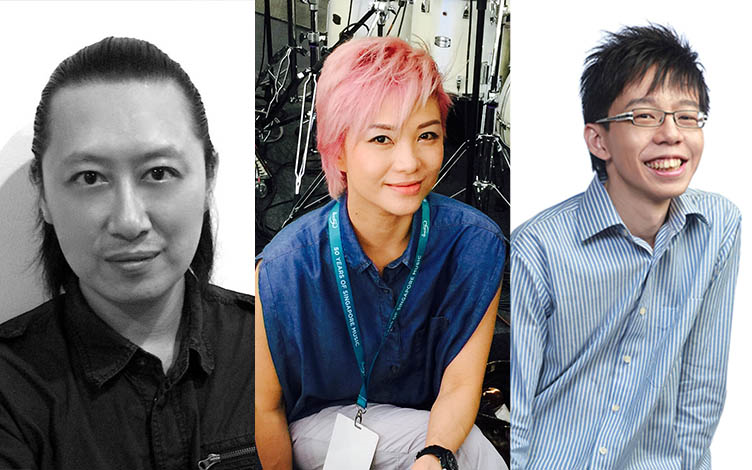 We put the spotlight on Singapore film composers Alex Oh, Christine Sham and August Lum, whose works include the SG50 film 1965 (by Daniel Yun and Randy Ang), Be With Me and In The Room (by Eric Khoo), and The Violin (by Ervin Han), a short animation film depicting the journey of a violin through 80 years of Singapore history. Enjoy the evocative scores as they are performed to snippets of these films

Alex Oh is a prolific film composer, music producer and pianist. In his career spanning over a decade, he has scored many award-winning features that run the gamut of genres as diverse as comedy; family; action, such as Taxi!Taxi!, My Dog Dou Dou, Imperfect, It’s A Great Great World; and darker films like Bait, Rule Number One, Faeryville and The Maid .

He was nominated for Best Original Music Score at the Asian Television Awards in 2004 for the television series The Frontline. His recent film score was the highly-anticipated SG50 movie, 1965.

Composer, keyboardist, producer and educator Christine Sham graduated from the prestigious Berklee College of Music, majoring in Professional Music. She toured with some of the biggest names in the Chinese pop industry including A*Mei, Stefanie Sun, Eric Moo, F.I.R and David Tao, having travelled to over 40 cities in China as well as the UK, USA, Australia and Paris.

As a composer for film and television, Christine scored five feature movies including Singapore director Eric Khoo’s 2016 In The Room, animation Tatsumi in 2011, not to mention a string of television commercials she has done for the past 15 years. 2015 saw her as a music producer in Asia Got Talent, and this year, she composed music for Mediacorp’s virtual tour at their new headquarters. She has also been teaching pop piano and Introduction to Soundtrack at LASALLE College of the Arts and SOMA (School of Music and the Arts) since 2008.

His score for The Violin was awarded Best Full-Length Music Composition at the 2016 Apollo Awards. Consecutively, two theme songs that he arranged were nominated Best Theme Song at the 2014 and 2015 Star Awards. Currently, he is the Director of Music at StereoImage Studios, an audio production house.