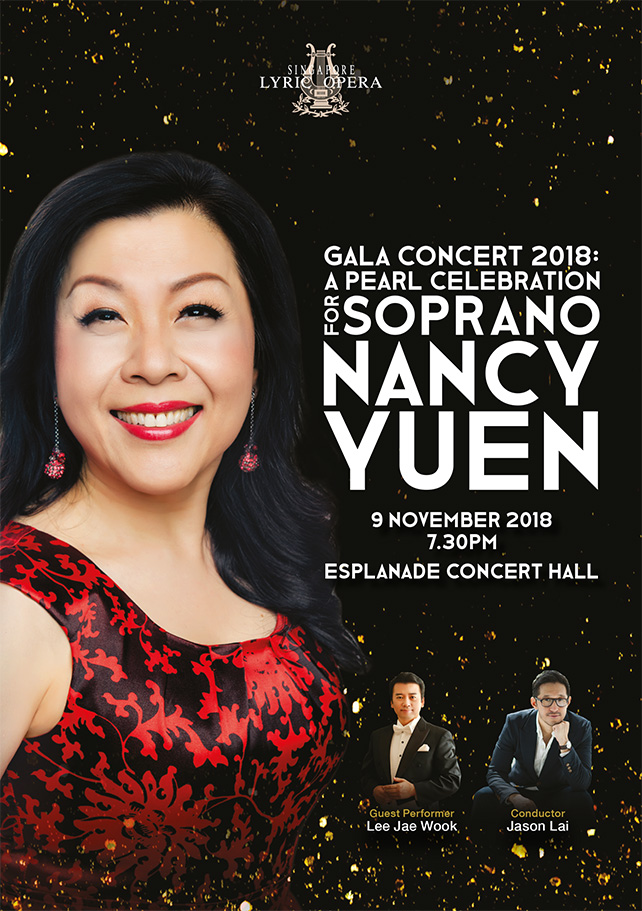 Having made her debut with the Welsh National Opera in the titular role of Madama Butterfly in 1988, soprano supremo Nancy Yuen, a graduate from the Royal Academy of Music London, will be celebrating her 30th anniversary in the opera scene with a gala concert here in Singapore on November 9, 2018 at 7:30pm at Esplanade – Theatres on the Bay.

The gala concert is a celebration of her achievements in the opera scene in the last three decades, and also the contributions she has made to promote opera and make it accessible to people of all ages and cities, especially in Singapore. During her tenure as the Artistic Director at the Singapore Lyric Opera, she has conceptualised and implemented the ASEAN Vocal Competition to increase the awareness of opera across the ASEAN region and discover new talents, the Leow Siak Fah Artists Training Programme to groom young artistes to their fullest potential, and had brought opera to the masses by creating the annual “Opera in the Park” event.

Fans of Nancy Yuen’s will be delighted to know that she will be performing several widely acclaimed arias such as Butterfly’s Entrance (Madama Butterfly), E strano, sempre libera (La Triviata) and Dove sono (Le Nozze di Figaro) during the gala concert.

Besides soaking in Nancy Yuen’s creamy and silky voice, audience can also expect to be enthralled by Lee Jae Wook, a tenor from South Korea. Lee will be flying in for the gala concert as a guest performer. A first prize winner in the National Vocal Music Competition in Korea, Lee is an internationally renowned opera singer who is also a laureate of numerous international competitions including Montserrat Caballè, Rosetum, and Nino Carta.

Venue: Esplanade – Theatres by the Bay