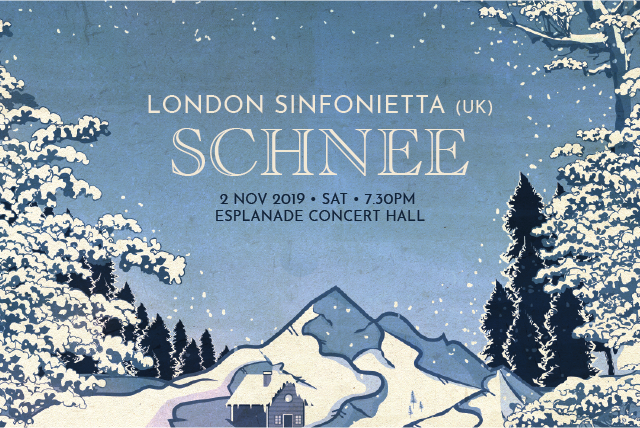 “The Sinfonietta blended rigour with the expressive depth in Hans Abrahamsen’s Schnee.” – The Guardian

Regarded as one of the world’s finest contemporary classical ensemble, London Sinfonietta returns to the Esplanade Concert Hall with three innovative and expressive works written within the last 30 years.

Monumental and ethereal, Danish composer Hans Abrahamsen’s Schnee reflects the composer’s fascination with winter by offering multiple aural perspectives of snow—from the delicacy of a single snowflake, whispering as it falls from the sky, to vast impenetrable snowdrifts and snow-laden landscapes.

Equally evocative is Oliver Knussen’s set of four miniature works, Songs Without Voices—The first three being complete poems with each syllable “set” to music for instruments (without voice); and the last featuring the cor anglais. Together with OpusNovus, London Sinfonietta will begin the evening with an encounter of the unexpected with Singapore composer Diana Soh’s Modicum, a work consisting of seven short movements, the sequence of which is shuffled or rearranged for every performance.