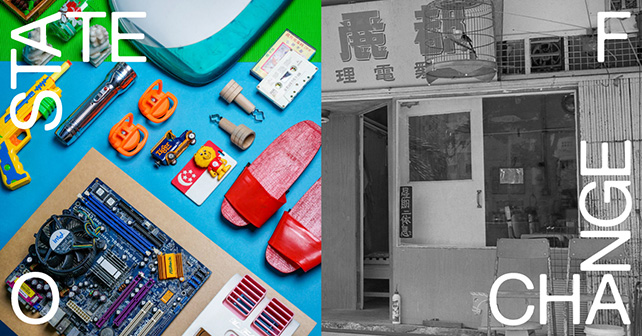 STATE OF CHANGE is a joint exhibition presented by DECK examining the significance of memory in a city-state where change is the only constant.

Featuring two independent projects that employ photography in the activation of memory, “Some Other Way”, by Nicholas Koh and Jiahui Tan, and “Singapore’s Vanished Public Housing Estates”, by Koh Kim Chay and Eugene Ong.

SOME OTHER WAY is an exhibition based on the imminent closure of the Sungei Road Flea Market on 10/7/2017. Notoriously known as the Thieves Market, the space will make way for residential and commercial developments. Many documental attempts have been made, mostly representing the market as a haven for stolen goods and discarded items. Instead of presenting the space in the usual grungy black-and-white street photography style, this direction takes on a vastly different approach. Products collected from various hawkers are presented in a vibrant pop-art manner, a salute to the colourful decades of Singapore’s history. Most of the peddlers have not been given alternative spaces to shift. Have we explored the options fully? There must be some other way.

The 15 expunged estates featured in SINGAPORE’S VANISHED PUBLIC HOUSING were built by HDB’s predecessor, the Singapore Improvement Trust (SIT). As examples of low-cost housing meant to quickly alleviate the housing crisis after the Japanese Occupation, these buildings were simple, built to sound specifications and intended by the Colonial authorities to last at least 4 decades in tropical weather. Other buildings constructed a few years after the war explored the modern streamlined aesthetic in the 1940s, though many such concrete dwellings were ultimately considered to be of the austerity type. Most have been quietly effaced from local directories since the start of the millennium. As pictorial records of our first homes in historically significant and newly emerging estates before Independence, the series of photographs are an invaluable window into Singapore’s changing housing landscape in the 50s and beyond.