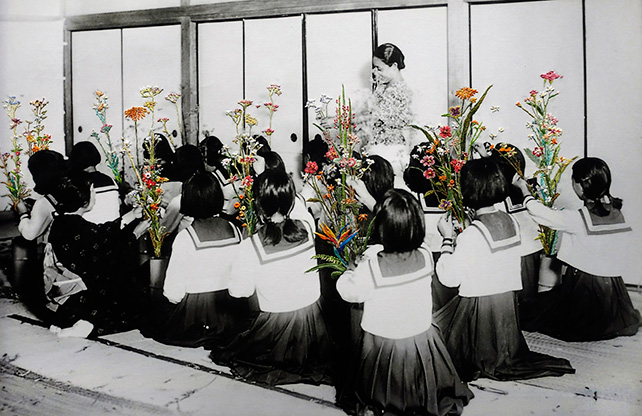 String Theory – Sewing Space presents two existing works from the artist – White Uniform and The Women of Empire No. 1 – as well as a site-specific project – Sewing Fields.

A collaborative work with Taiwan Railways Administration kitchen in Qidu, near Taipei, White Uniform pays particular attention to women who labour over the making of intricate designs on seaweed for placement within bento boxes. In noting the different tasks performed by men in the background of the women’s work, the division of labour by gender is highlighted.

The Women of Empire No. 1 brings attention to the role colonialism and political regimes have to play in shaping this present division of labour. A delicately embroidered photographic print of an archival image from the period of the Japanese occupation of Taiwan, the image features schoolgirls tending to, presumably, a school garden.

Yet, it is the idea of collective female labour that runs as a unifying strand across the works presented. The notion is strongly brought across in Sewing Fields, which would see student volunteers from the Nanyang Academy of Fine Arts activate the installation – painstakingly colourising the canvases thread by thread – over the course of the exhibition.