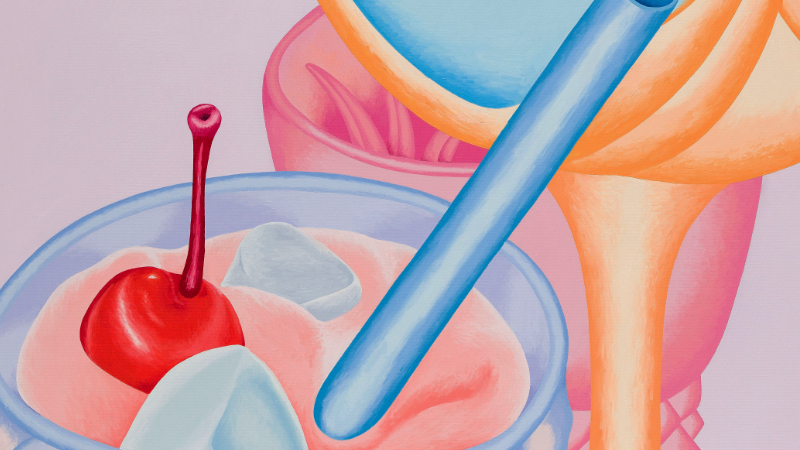 Cuturi Gallery is proud to present Summer Never Ends featuring new works by three French artists; Louis Granet, Idir Davaine and Julien des Monstiers. With all three artists having exhibited before at the gallery with solo presentations, this time they come together unified by the application of vibrant and fresh colours reminiscing the feeling of a European summer.

Known for his approach to painting influenced by the iconography of comics, Louis Granet (b. 1991, Bordeaux) takes a different approach for this show. During the time spent here in Singapore for his residency, Granet has been influenced by the greenery amidst the gleaming skyscrapers. Drawing inspiration from everyday life and objects, Granet observes his surroundings and creates an interpretation of what he sees on the canvas. In addition, a series of freshly crafted cocktails will also be presented which are personal memories of his recent honeymoon with his wife in Greece. Through his lively composition, Granet creates visual dynamism and satiation. His fresh interpretations of the concoctions resemble ocean waves, sublime sunsets, and the endless European summer, which he reminisces on the tropical island of Singapore.

Bearing resemblance to the works of German painter Günther Förg, Idir Davaine (b. 1990, Paris) incorporates organic forms and generously applies colour to convey emotions that meet, merge or clash onto the canvas. This portrayal of fragmented imagery is apparent through his current series of works. Davaine’s painterly gestures of freeing such forms from their materialities, straddles between the real and the illusory, playing with our perceptions.

Each canvas then presents an assemblage of shapes and colours, decisively manipulated and dispersed to produce a visual composition that hints at storytelling and narrative. Such process sees Davaine’s conscious reiteration of manipulation in his approach that not only challenges, but also plays with our perceptible realities.

Much like the works of Davaine, Julien des Monstiers’ (b. 1983, Limoges) approach does not stray from his signature style of foregrounding floral motifs. Similar to his previous show, Flowa Powa, we witness the continuation of the articulation of colours and textures that achieve depth within each piece. In this show, Monstiers presents three new works borrowing a multitude of aesthetic principles including collage and montage challenging the conventions surrounding a painting.

Fragments of everyday life become compositions of colours, shapes, and textures, constructing works of ambiguous translations. Clever manipulations of organic forms and depth create an assemblage of fluid yet structured pieces. With each artist, we are able to witness an unparalleled approach to the canvas. Nuanced with subtle visual illusions, these paintings are much more than meets the eye. The activation of colours and patterns in each work holds individuality saturated with deep proficiency. This exhibition entices the viewer to manoeuvre through the complexities of the elements presented. These works are portraits exemplifying the youthful vibrancy during summertime.

Summer Never Ends will be on view at Cuturi Gallery from 10 to 25 September 2022. Admission is free.