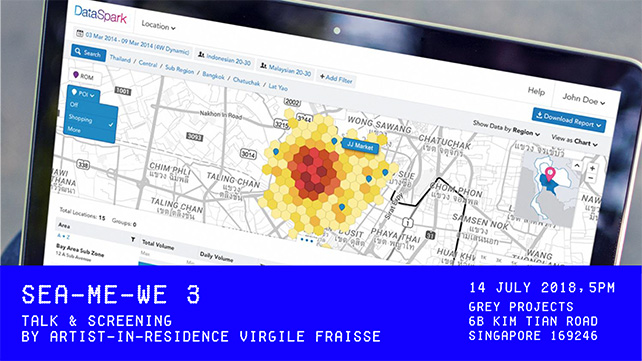 SEA-ME-WE 3 is the third instalment of Virgile’s research and film project, SEA-ME-WE. Originally the name for an optical submarine telecommunications cable system carrying telecommunications between Singapore and France (linking cities such as Mumbai, Karachi, Alexandria, Suez, Palermo, Bizerte and Annaba), SEA-ME-WE, or Southeast Asia-Middle East-Western Europe, is also a fortuitous pun for “The Sea, Me and We” for Virgile’s project.

Based on the development of Singapore’s telecommunication industry and its various sponsorships, SEA-ME-WE 3 is a comedic film that sketches the allegedly isolated destinies of a Tamil cable worker and a neoliberal art critic. Performed throughout the city, this body politic is deployed as experiments, commenting on geotracking softwares. Come learn more about the project and catch a sneak preview of footage filmed during Virgile’s residency.