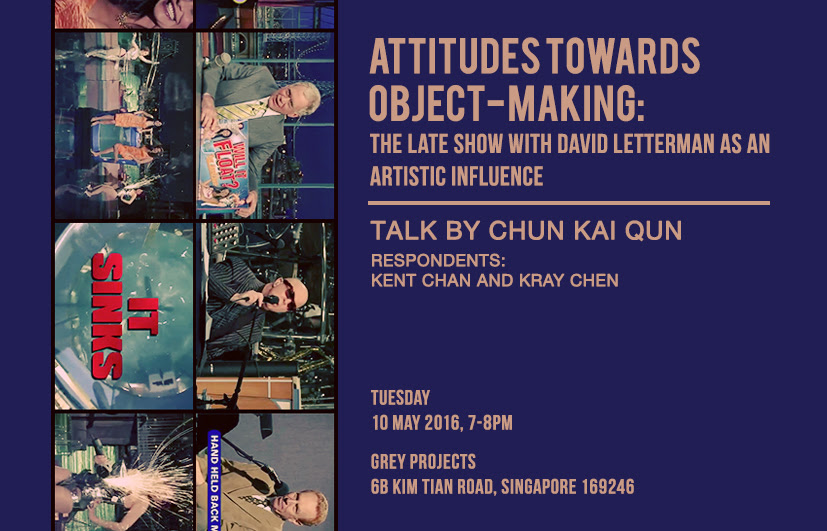 Chun Kai Qun is interested in the study of object biographies to better our understanding of how they texture and inform human identity. He examines everyday objects as a reflection of personal tastes, attributes, moral principles and social ideals.

In this talk, Kai Qun will share with us the shifts in his artistic practice over the years, and how his love for the Late Show with David Letterman has influenced his works. An American talk show that debuted more than a decade before YouTube revolutionised global television culture and the video landscape, Kai Qun avers it to be the most subversive television programme to be aired in Singapore during his teens in the mid-90s. He considers the show to have a profound influence on the distinct and measured sense of humour embedded in his approach towards object-making. More specifically, this influence is shown through the use of particular structures that envelop his objects, such as precisely timed loops and episodic instruments within his video works to repeatedly deliver a potent punchline. Like a talk show, he also considers exhibition-making to be a stage whereby theatrics can highlight, yet still uphold the unremarkable qualities of everyday objects, making apparent the social model of production, a process where material is transformed into consumer goods within the realm of art.

Kai Qun will also discuss his ongoing collaborations with dancers Bernice Lee, Eng Kai Er, Faye Lim and Jereh Leung, as well as his newest work The Practice of Body and Place. An attempt to inscribe places into bodies through ritualistic dance performances, the work examines the mnemonic potential of the body to evoke the spirit of a place.

Joining Kai Qun in his talk will be artists Kray Chen and Kent Chan, who will be participating as his respondents.