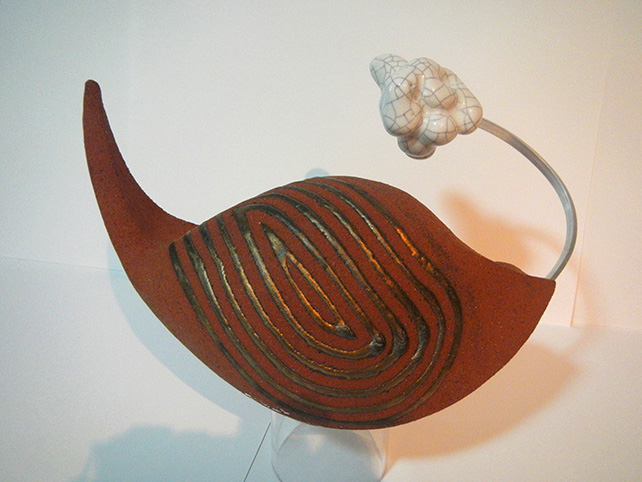 This exhibition is an extension of Bakar’s work from his 2012 exhibition Tanah Ini Ku Punya, (Land/Earth I Owned). This series was inspired by the artist’s visit to the village of his birth a few years prior, where he experienced conflicting sensa-tions of belonging and separation. Holding a Malaysian passport, but spending most of his life in Singapore, Bakar is no stranger to contrary affections and through the mediums of ceramics, photography, and performance, he often ex-plores physical and symbolic connections and disconnections between land, identity, and faith.

This second edition, Siri OBJEK & OBJEKTIF, speaks to the notion of “land” as inspired by the Malay proverb “Di mana bumi ku pijak di situ langit ku junking,” that is, “where one stands (on the land) is where one should hold up the sky.” As such, this series of ceramics lean toward the physical — the “objek.” While the vessels are grounded by geometric form and shape, from each base extends an ethereal arm presenting more organic manifestations of existence, suggestive of authentic relations extending beyond nationalistic loyalties, histories, and identities. Through material, form, and structure, Bakar considers meaning, or the possibility of mean-ing, inherent in our associations with place.