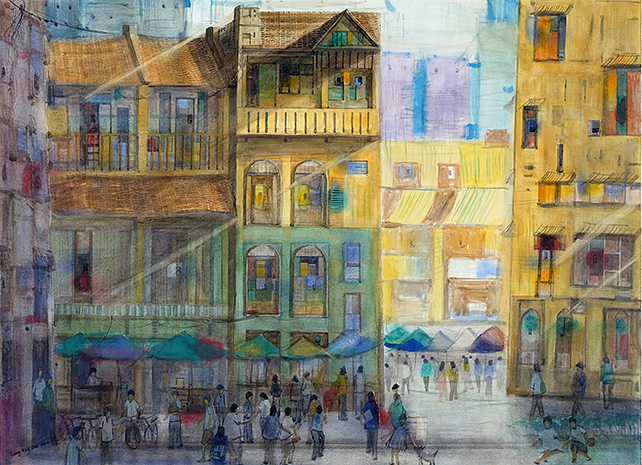 Explore the colourful worlds of 2017 UOB Painting of the Year winner, Mr Tang Kok Soo, through his Tang and Tranquility exhibition at the UOB Art Gallery, which launches on Wednesday 12 April 2017.

A firm believer that every artist’s moral character and qualities shape the art they create, Mr Tang focuses on painting with a clear and conscious mind. He also believes that art has the power to leave a positive mark on society, and channels positivity into all his works.

Tang and Tranquility showcases Mr Tang’s mindfulness and positivity through 11 uplifting mixed-media paintings in his Stone series, alongside five whimsical watercolour pieces in his Cityscape series. All the paintings on display are for sale.

Born in Johore, Malaysia in 1975, Mr Tang spent his childhood in Brunei before moving to Singapore in 1986. As a young adult, Mr Tang discovered his passion for fine art in Singapore, where he was exposed to watercolour and oil painting techniques. Mr Tang continued to practice fine art as a hobby until 2013, when he decided to leave his engineering career to become a full-time artist at the age of 38.

Mr Tang is now a full-time artist and has participated in several art exhibitions, including the Singapore Watercolour Society Annual Exhibition since 2012 and the 2015 Singapore Affordable Art Fair. He specialises in whimsical mixed-media pieces which explore the themes of peace, love, joy and community. He creates his artworks with pencil, charcoal, watercolour, Chinese ink and acrylic on paper.