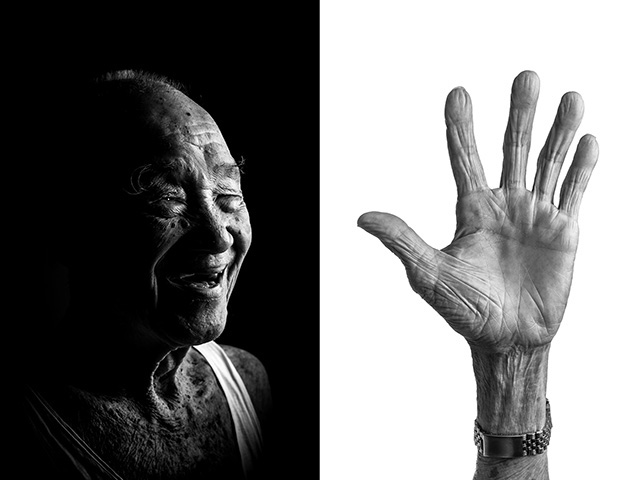 “Tell-tale Lines” is a series of black-and-white photos that shines light on the wrinkled faces and hands of Singapore’s pioneers. The style is stark, personal, honest – allowing the subjects to tell their stories in the simplest of ways.

When photographer Alan Lim was growing up in the 1970s and 80s, one scene entrenched itself firmly in his mind – that of people working hard. Whether it was workers laboriously grinding out tofu with a traditional stone wheel at his grandparent’s shophouse in Waterloo Street, or his father starting his day at 1am lifting and butchering meat in a Toa Payoh wet market, the ordinary person in post-independence Singapore was always hard at work.

This tireless ethic formed the backbone of Singapore’s miraculous ascent to affluence today. While the contributions of politicians and business leaders are well-documented and celebrated, success would not have been possible if not for the legions of everyman workers who toiled behind the scenes. Their stories were never recorded on paper. The only tell-tale signs now are etched on their weathered faces and hands.

During the exhibition period there will also be two free photography workshops given by Alan, on 18 March at 7pm, and on 27 March at 1pm. In the 1 hour workshop Alan will share his approach in creating his work. Registration is required and must be made by email us at contact@sops.sg.