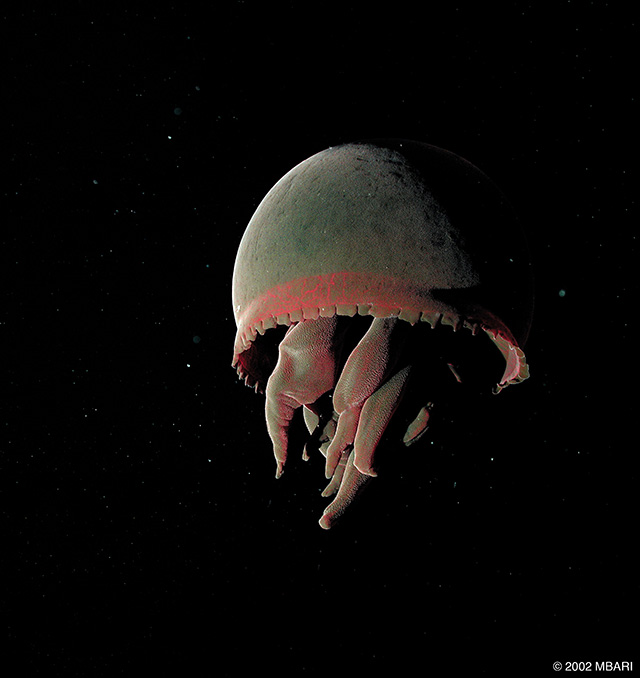 Tiburonia granrojo, The Big Red This large dark and velvety ball was discovered in 1993 by MBARI researchers in California. It is so different from other jellies that biologists had to create a new subfamily for it, called the Tiburoniinae, after the Tiburon, the robot that discovered them. To capture its prey, it does not use stinging tentacles, as do the majority of jellies. Rather, it deploys long fleshy arms whose number varies, curiously, between four and seven. Very little is currently known about this creature.

Opening on 6 June 2015, The Deep invites visitors to discover the beauty of the ocean life in an immersive environment. This exhibition will reveal the mysteries lurking in the deep through the display of perfectly preserved and extremely rare animals in crystalline detail. Odd and mesmeric, these breathtaking specimens – making their debut in the region – will be accompanied by 67 images of captivating sea fauna and ethereal bioluminescent creatures, some photographed for the very first time.

They include Tiburonia granrojo (The Big Red). This large dark and velvety ball was discovered in 1993 in California. It is so vastly different from other jellies that biologists had to create a new subfamily for it. Another deep-sea creature that will be exhibited is Grimpoteuthis sp. (Dumbo Octopus). This little octopus looks almost like a character out of a Japanese cartoon.