The Foot Beneath the Flower: Camp. Kitsch. Art. Southeast Asia 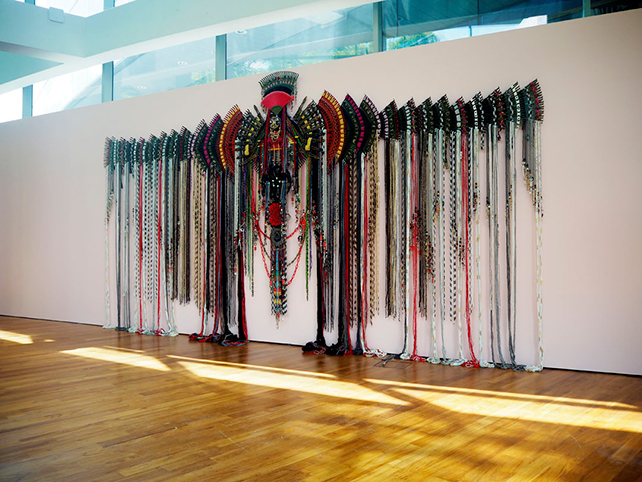 The Foot Beneath the Flower is an exhibition of contemporary art from Southeast Asia in the key of high-pitched camp and kitsch. Camp, as Susan Sontag has remarked, is characterised by artifice, frivolity and “shocking excess”, qualities that likewise mark the aesthetics of kitsch. The show proposes that such excess may nonetheless encompass themes that are in equal measure canny, critical, and redolent of the realities of life in Southeast Asia today.

The works here engage with the region in various ways, representing familiar socio-cultural narratives as stylistic froth and counter-ideological glee, as seen in the works of Arahmaiani, Kawita Vatanajyankur and Việt Lê. The recontextualisation of everyday Southeast Asian visual and material cultures within the frameworks of camp and kitsch are being embodied across installation, sculpture and mixed media works of Haffendi Anuar, Johann M. F., Khairullah Rahim and Stephanie Jane Burt with Samuel Xun.

Issues surrounding gender and identity remain in contemporary Southeast Asian society today, and artists Alvin Ong, Anne Samat, Chuah Chong Yan and Richie Htet delve into these complexities by featuring personal as well as biographical references. Engaging with allegory and mythology, Hoo Fan Chon, ren zi and Wong Lip Chin expand the possibilities of representing historical narratives, at times treading into the realms of fiction and the fantastical. Negotiating the realities of societal conventions, the works of Daniel Kok, Joshua Kane Gomes and Geraldine Lim are premised on subjectivities, utilising the visual idioms of kitsch as strategies of subversion to complicate the status quo.

The artists, who hail from Indonesia, Malaysia, Myanmar, Singapore, Thailand and the Vietnamese diaspora, deploy the indulgence of camp and kitsch in radical and responsive ways. By co-opting the contours of urban existence for their own purposive ends, they foreground the possibilities of art from Southeast Asia as flamboyant, deceptively frivolous objects.