The Journey of Minds: Chinese Modernity and Chinese Ink-Painting in Singapore 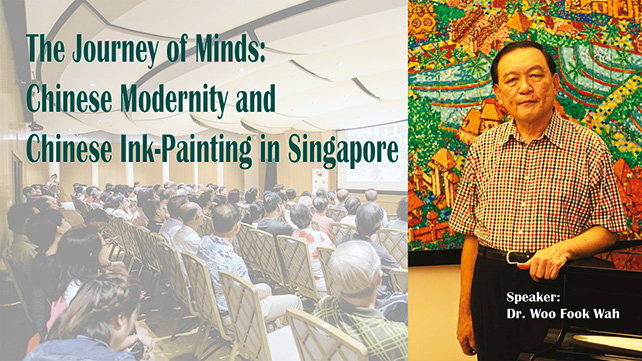 “The Journey of Minds: Chinese Modernity and Chinese Ink-Painting in Singapore” traces the journey of modern visual arts in Singapore. After the fall of the Qing dynasty, the need for renewal had triggered many Chinese scholars including artists to travel abroad in search for modernity that could be appropriate for the, then newly liberated China. Singapore, being a popular transit point and having a large Chinese migrant population, benefited from the knowledge that the artists had acquired.

The art scene in Singapore was vibrant even before the second world war. After the War, the art practice in Singapore was further developed. We have new migrant artists from China that had made Singapore their homes and they were enthusiastically sharing their knowledge while they explored their new surroundings, which they called Nanyang.

As time passes, Singapore began to take a journey of its own as artists began to further develop the ideas that this unique city-state offered with its multi-racial and multi-cultural outlooks. The research discovered that a new oeuvre of art-works in Chinese-ink genre seemed to have emerged. Hence, the focus was directed to look at examples of this innovation and asking if this oeuvre of artworks can be considered in specific as Singapore Chinese-Ink Paintings.

Registration is required at https://www.sistic.com.sg/events/journey0120