The Little Prince in the Dark 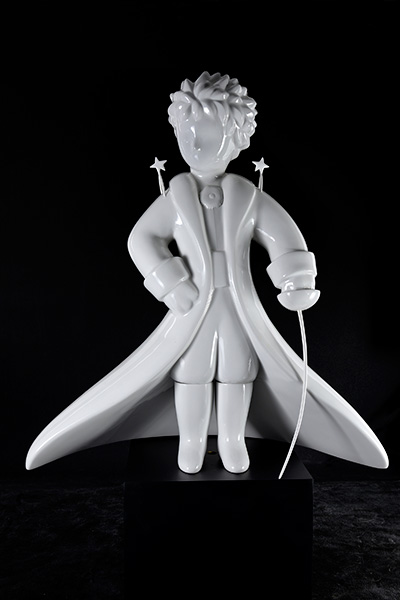 French visual artist Arnaud Nazare-Aga started a meaningful collaboration with the Antoine de Saint-Exupéry Youth Foundation in 2014, and together they have conceived a unique touring art exhibition of never-before-seen sculptures inspired by the original watercolour illustrations of Antoine de Saint Exupéry’s universally-renowned book, The Little Prince. Two one-of-a-kind exhibitions paying tribute to Antoine de Saint-Exupéry will be presented for the very first time in Singapore as part of “Voilah!”, French festival Singapore”, a major French cultural festival organised by the French Embassy and the Institut Français Singapour, in collaboration with the French Chamber of Commerce, which will take place from 4th May to 21st June 2015 to celebrate SG50.

The exhibition attempts to bring The Little Prince illustrations to life by the sense of touch. The artist has created 13 all-white sculptures to be discovered by the senses of touch and hearing and that will be presented in the dark. Visitors of this exciting exhibition will immerse themselves in the dream world of The Little Prince and its planets by touching the sculptures while listening to extracts of the book. Several languages will be available including English, Chinese and French.

Arnaud Nazare-Aga is also contributing to a limited-edition series of sculptures based on Saint-Exupéry’s beloved children’s book at The Fullerton Hotel Singapore (from 7th May to 31st May 2015).

First published in 1943, The Little Prince is both the most-read and most-translated book in the French language, and was voted the best book of the 20th century in France. Translated into more than 270 languages and dialects and selling nearly two million copies annually, it has become the best-selling book ever published. Though ostensibly styled as a children’s book, The Little Prince makes several observations about life and human nature including the famous lines uttered by the fox tothe Little Prince: “One sees clearly only with the heart. What is essential is invisible to the eyes.”