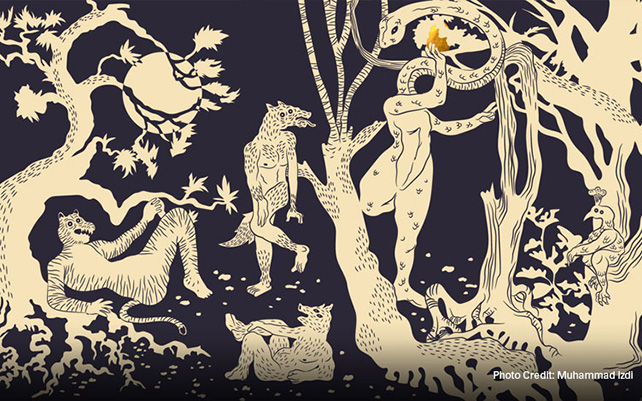 Through a series of murals that unfolds across the Esplanade Community Wall, The Menagerie Race reflects on man’s fallibility and vanity, driven by an unceasing of the meaning of life. Set against a backdrop of various landforms and foliage, the work comprises traversing anthropomorphic forms informed by Izdi’s long-standing interest in mythology and folklore. These influences include the seminal poem The Conference of the Birds written by Persian poet Farid ud-Din Attar in the 12th century, which allegorises the search for spiritual truth, as well as the folly of greed from Aesop’s fable, “The Goose that Laid the Golden Eggs.” An exercise in visual storytelling, The Menagerie Race draws upon humour, narrative and artistic devices to depict the catastrophic trajectory of its characters.