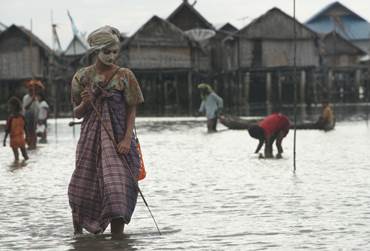 Pakis, is a young girl who lives in Indonesia’s Wakatobi archipelago. She is waiting for her father to return from fishing. Pakis does not give up hope and quickly finds herself at odds with her mother who has put on a mourning mask. Every night Pakis searches for the answer in the mirror her father gave her. Only a prankish boy named Lumo manages to divert her thoughts with the help of the living sea world full of fish and coral reefs, in which the children enjoy their everyday.

The film is a semi-ethnographic work about the Bajo nomadic community, also known as Sea Gypsies, whose life reflects the sea in which they live and with which they are closely connected.

Director: Kamila Andini
Kamila Andini is an Indonesian film director known for her critically acclaimed debut The Mirror Never Lies. The film was one of the first to document the Bajau people, including several of their rituals and using their language extensively. The film has won several awards in both domestic and international film festivals including Best Film and Best Director at the 2012 Bandung Film Festival.