The Story of Cheong Soo Pieng 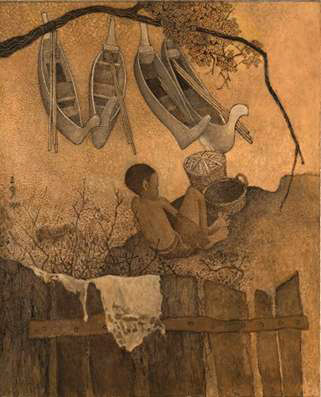 From 19th June to 26th July, artcommune gallery presents an exclusive showcase of Cheong Soo Pieng’s artworks. On display are over 30 works of varying styles and mediums, including the artist’s early oil and watercolour compositions which were heavily influenced by European modern art movements, a collection of sketches and highly stylised paintings relating to the everyday Malayan life as well as his travels to Bali, Sarawak and Europe; and his late period of abstract and mixed media compositions.

A pioneer of the Nanyang art movement and an eminent figure in the development of fine art in Singapore, Cheong Soo Pieng (b. 1917 – 1983) is widely regarded as one of the most prolific artists of his generation. During a practice that spanned five decades, Soo Pieng established a wide-ranging repertoire of styles and mediums; his bold pursuit of Modern aesthetics and innovative amalgamation of forms and techniques derived from both Western and Chinese art traditions have continued to make fascinating study points for critics and collectors today.

Despite being one of Singapore’s most revered pioneer artists, the majority of Singaporeans remain barely aware of Soo Pieng’s multifaceted art practice and his important contribution to our local art scene and heritage. This extensive showcase is specially curated and chronologically outlined to help audience understand the diverse styles that emerged and were synthesised during the different periods of Soo Pieng’s career.