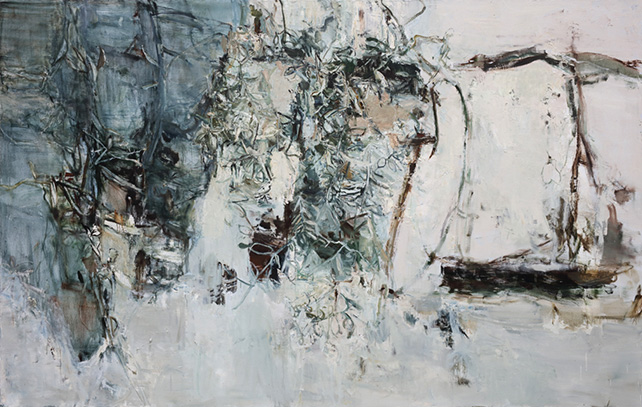 Tu represents a generation of Chinese artists whose oeuvre deals with the intimate psyche of urban dwellers in a rapidly progressing nation. He cultivated a distinct painting style that featured graphic markers of China’s hyper-capitalism and modernization. For the artist, this became a means of narrating the tension between contentment and isolation that is familiar to city living.

Since 2012, Tu’s paintings have not only revealed a greater degree of abstraction, but also move towards a more introspective, open-ended assessment of the times. Where once were collapsed human figures – representational of the detached and transient nature of urban lifestyles, now lies a strange, melancholic landscape of indeterminate forms. Adopting anachronistic techniques from classical Chinese painting to depict strange foliage and mysterious scenery, these works begin to portray new dimensions of time and space, reshuffling systems of information as it were. The primordial compositions are suspended in a liminal space between personal history and cultural paradigms, laying the foundations for a nascent, hybrid worldview.

Whilst the artist is known widely in the international, Chinese, and Hong Kong markets via the auction arena, this will be his very first exhibition abroad in recent years.