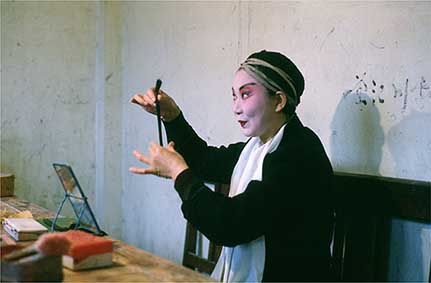 China. The Arts – The People, Photographs and Films from 1980s and 1990s is an exhibition by acclaimed artist and filmmaker Ulrike Ottinger (Germany). This first large scale exhibition by the award-winning artist in Asia will juxtapose Ottinger’s cinematographic productions with her work as photographer. This resentation comprises four films and over one hundred photographs and focuses on her research and travels in China during the 1980s and 1990s, including a three-screen video installation. Depicted in China. The Arts – The People (1985) is the everyday life in Beijing, Sichuan Province, and Yunnan Province. Whereas in Taiga (1992), Ottinger looks at the life and rituals of nomadic peoples in Northern Mongolia, specifically the Darkhad nomads and the Sojon Urinjanghai. This eight-hour documentary will be presented on multiple monitors throughout the exhibition space allowing the visitor to embark on a journey of their own. Ottinger’s photographs, created throughout her career and largely in parallel with the production of her films, will be unfolded along the artist’s leitmotifs.

Two films will be shown alternating in The Single Screen: the documentary Exile Shanghai (1997), which tells the six life stories of German, Austrian, and Russian Jews intersecting in Shanghai after their escape from Nazi Germany, and Johanna d’Arc of Mongolia (1989), her only feature fiction film shot in China. Driven by her curiosity for people and places, Ottinger’s images vary between documentary insight and theatrical extravagance, presenting encounters with everyday realities at the intersection of the contemporary, the traditional, and the ritual.

Ottinger, initially a painter, came to filmmaking in the early 1970s. During her career she has created an extensive image archive, including photographs, collections of postcards, cut-outs, illustrations, and other iconographic documents. She furthermore produced operas, several theatre plays, and radio dramas. Her films have received numerous awards, having been shown at the world’s most important film festivals, and appreciated in multiple retrospectives, including Rio de Janeiro International Film Festival, Museo Reina Sofia, Madrid, The Museum of Modern Art, New York, and Cinémathèque Française, Paris. Her work has been featured in major international exhibitions and biennales including the Gwangju, Shanghai and Berlin Biennales. Documenta 11 presented several of her works. Her most recent solo shows include Haus der Kulturen der Welt, Berlin, Neuer Berliner Kunstverein, Berlin, and Witte de With Center for Contemporary Art, Rotterdam. In 2011, Ottinger was awarded the prestigious Hannah-Höch-Prize for her creative work.