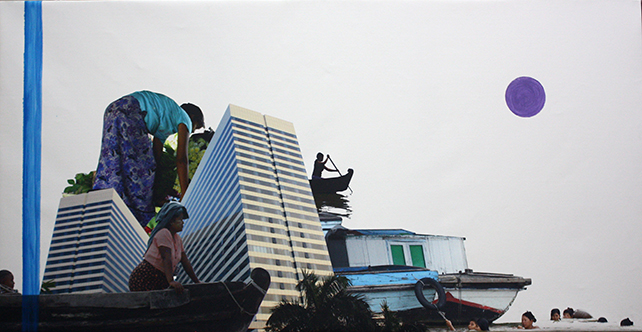 Unknown Women 04: Siege Unit questions the current transition period in Myanmar and the changes of the city landscape. In the wake of the political changes and of the opening of the country to foreign investors, condominiums, business centers, lavish shopping malls and restaurants have been mushrooming in Yangon. However, for Zoncy, the poor people and among them the women do not benefit from the long awaited economic development. As long as the society will be plagued by corruption and by the opacity of the administration the wealth of the country will not be better distributed, the rich people will become richer and the poor people will not have access to education, to better jobs and healthcare.

In this series, Zoncy represents women working in the streets of Yangon and Mandalay. She strives to draw the attention on the struggle and on the social role of these women as guardians of Myanmar identity and culture.