UNSANCTIONED: Voices Off the Wall 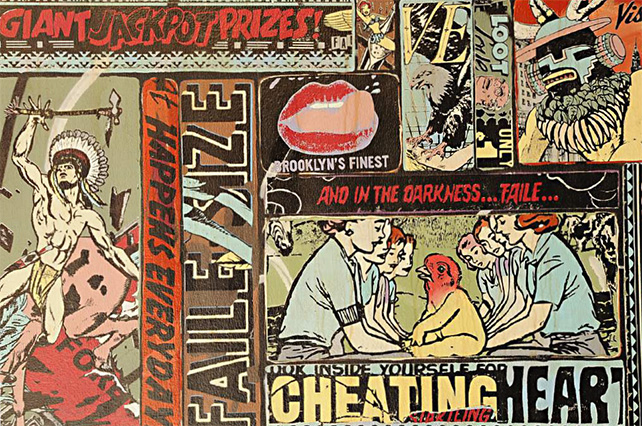 UNSANCTIONED: Voices Off the Wall is an exhibition exploring Street Art’s diversity in style and technique and its enduring influence on contemporary society. The exhibition features some of the most renowned street artists of the 20th century including Blek le Rat, SEEN, C215, George Morton-Clark and RISK, among others.

In the 1960s, street artists took art from the traditional canvas and stuffy salons to the walls and streets of the city. Originating as spontaneous text-based responses to the environment, Street Art intervened in public space, personifying the environment in a provocative or tongue-in-cheek way. This resulted in the urban explosion of 1970s New York. As the genre matured visually and conceptually, it engaged elements of popular culture, incorporating social and political addendas to highlight the current state of affairs, sometimes making bold political statements.

Referred to as the ‘Godfather of Graffiti’, SEEN’s iconic creations first appeared on the New York subway in the 1970s. After earning international acclaim, the artist transitioned to painting on canvases and exhibiting in galleries and museums, adapting the ideology learned on the street. SEEN’s artistic career is emblematic of how the genre has evolved from a countercultural movement emerging from urban sites to an elevated art form with its distinct iconography, materials and techniques.

While the dynamic nature of the medium makes it impossible to categorise and contain, Street Art has broadly moved from an expression of self, to a shared voice articulating the hopes, struggles, and ideals of larger society. This commitment in tackling socio-political issues is evident in the work of artists such as C215, who depicts famous French literary and political figures, and stencil graffiti legend Blek le Rat, who has dedicated his art to demonstrating the dignity of ordinary people.

UNSANCTIONED unites some of the most influential voices of the genre, reflecting on Street Art’s power to reach a wider audience than that of the traditional museum or gallery. Each of the selected artists have been instrumental in shaping the urban movement into what it is today, and continue to push boundaries in the relentless evolution of the medium.