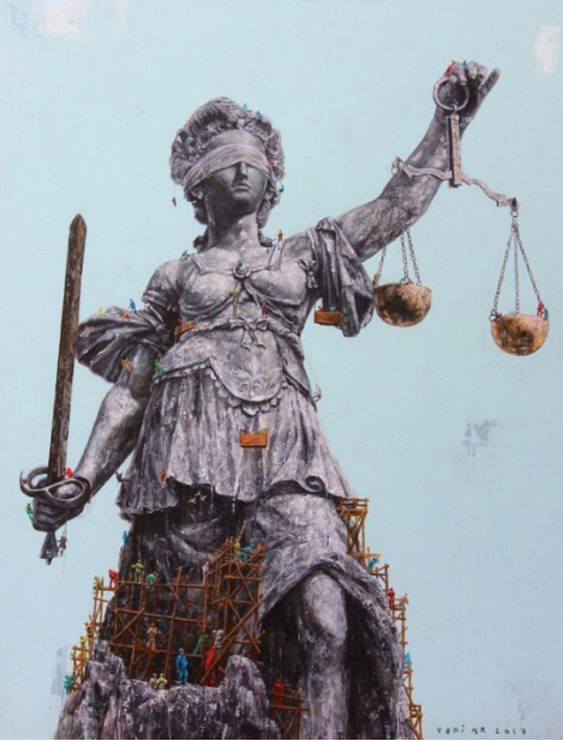 Indonesian artist Vani Hidayatur Rahman unveils a line-up of 15 brand-new works in his first solo exhibition in Singapore that opens on 27 June 2019 at Ode To Art Gallery.

Based in Yogjakarta, the 38-year-old Indonesian contemporary artist is renowned for his vivid, distinctive and realistic style. He has received a number of art awards including the Best Painting accolade at the 2012 Jakarta Art Awards, recipient of the 2013 UOB Painting of the Year Silver Award and was a finalist at the 2008 Jakarta Art Awards.

Vani’s acrylic paintings are decidedly modern, using urban imagery to reflect his life growing up in a rapidly developing Indonesia. He is especially gifted with textures, using brilliant colours and deft strokes to elevate flat paint into arresting, layered visuals.

Titled “Victory March”, the exhibition will showcase 15 new paintings center around pertinent themes of time, humanity and harmony – to illustrate his experiences and feelings.

During his time in high school, Vani began collecting tapes and making clippings about the musicians’ lives to understand the way of thinking that enables one to produce arts that contain criticisms for the ruling party. Therefore in his latest series of works, Vani draws on pop icons and well-known figures whom he respects such as Ludwig Van Bethoven, Kurt Cobain, and John Lennon to illustrate the common themes such as music that have the power to unite, rather than to divide.

This exhibition also serves as a visual representation of Vani’s thoughts of his past experiences which have found a place in his subconscious mind, as he brings with him a curation of works dealing with the concept of time, and a contemplation of our time on Earth. To the artist, time makes up an entire series of moments which underline the process, deed, or situation that takes place. Despite every encounter inevitably will reach a separation, individuals possess the capacity for ideas and thoughts that exceed their time.