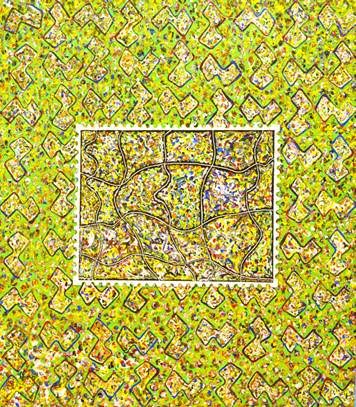 Voice of a Karung Guni Man follows the unusual yet inspiring journey of self-taught artist, Tan Chong Bin. Born in Singapore in 1952, Tan is a rag-and-bone man by profession (also known in local colloquial term as “karung guni man”). Tan was never schooled; he is illiterate and speaks very minimal Mandarin, usually relying on Hokkien (a Chinese dialect) as a main communicating language.

Tan’s passion for drawing flourished at the tender age of 8 and at 12 he moved on to drawing portraits. Being uneducated and financially-challenged did little to deter him from happily dedicating decades to art-making. Over the years he managed to observe and travel around Southeast Asia in a bid to learn more and enhance his art practice. In November 2014, Tan achieved an important milestone when his acrylic painting submission, 千变万画 (Endless Transformation) earned a Special Commendation award at the 2014 UOB Painting of the Year Competition in Singapore.

The 30 works in this exhibition, including the abovementioned award-winning painting and two other past competition pieces, explore the order and inter-relatedness between men and things in our complex universe. The compositions are characterised by a fluid and spontaneous style, often executed in thick impasto and bright, vivid colours; they express Tan’s colourful world and quick-witted thoughts, proving that a lack of verbal eloquence does not equate to a dull, unintelligible mind.