Voices – A Festival of Song 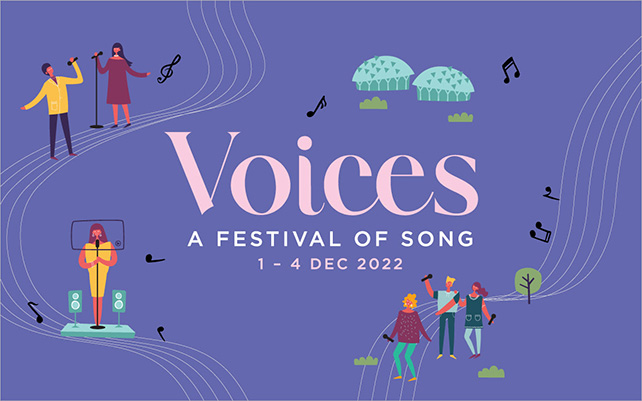 Voices – A Festival of Song returns from 1 – 4 Dec 2022 as a full festival after a two-year hiatus due to the pandemic which has affected singing more than any other art form. And it is double the celebration as the festival commemorates its 10th edition just as Esplanade – Theatres on the Bay turns 20 this year!

What has always made Voices so special is that it brings together so many different types of singing from choral, opera and a cappella to pop, musical theatre and xinyao. When we first started, it was a modest festival using only four venues. Now, for just one weekend, almost every corner of Esplanade comes alive with the sound of the human voice.

The theme for the 10th edition is homecoming, which is a befitting one, as we welcome back old friends such as The King’s Singers with a new Christmas concert. MICapella returns to Voices this year performing alongside regulars such as 1023 and Acapellago from the Philippines, in this year’s A Cappella Gala.

Beyond performances, Voices is also a chance for singers to come together and explore the voice. We will be bringing back our singing camps, with the Voices Festival Choir led by MI6—six conductors who debuted in Voices 2017 and have a long-standing relationship with the festival. And for the first time, we have commissioned a song composed by one of the members of MI6, Low Xu Hao, that will premiere at the festival.