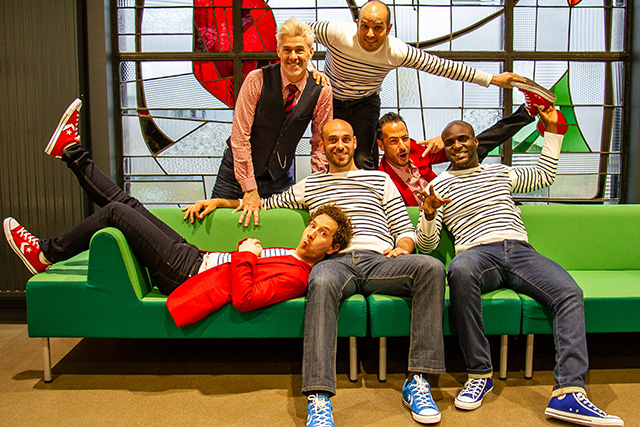 Formerly known as “A4”, the history of Opus Jam began in 1995 when the group’s founder Emmanuel Cappelaere met the American Gospel vocal group Acapella. He realised that their voices could express themselves with strength and greater intensity especially since voices were the only featured instruments. After 15 years of performance with 800 concerts and performances around the world, and five albums with over 35,000 copies sold, Cappelaere decided to broaden his musical horizon and enrich his arrangements. To do so, he created the sextet Opus Jam in 2012 at the Saint-Emilion with a wish also to remind the public that harmonised a cappella singing started in Europe. The group is supported by Ibrahim Maalouf, Didier Lockwood, Jean-François Zygel and other musicians.

Now, Emmanuel Cappalaere (tenor), Julien Guilloton (bass), David-Alexandre Aquiba (beatboxing), Rémy Arenas (baritone), Nicolas Gabet (soprano) and Mathieu Becquerelle (tenor) present a combination of polyphony with a touch of humour and lightness, giving a new and unique spin on a cappella singing. Opus Jam are the proud holders of the Grand Prix of the Moscow Spring A Cappella 2017 festival.