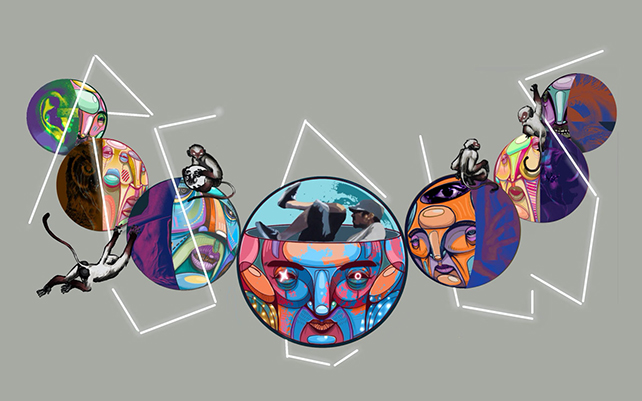 Commissioned in conjunction with the opening of the Singtel Waterfront Theatre at Esplanade and the centre’s 20th anniversary celebrations, the sculptural mural Wax and Wane was created collaboratively by Antz, DEM, TraseOne, SPAZ and ZERO from the urban art collective RSCLS. The central motif of the work is the dynamic and ever-changing transitions of the moon cycle, analogous to approaches of artistic creation and the cyclical facets of nature. Installed on the facade wall of the SWT, the work signals towards the expressions of movement, imagination and creative activities of Esplanade’s newest venue.

Formed in 2006, RSCLS is an urban art collective whose work often unfolds through uninhibited collaborations. They endeavour to evolve and develop urban art in Singapore and have played an instrumental and intermediary role in spotlighting and creating spaces for the art form. RSCLS is also active in archiving and documenting urban art practices in Southeast Asia and establishing networks and connections with international street artists.