ReDot Fine Art Gallery extremely honoured to welcome back one of Australia’s most exciting Indigenous community art centres and one of the countries most renowned living artists. To kick 2016 off with a huge bang, and to coincide with Art Week, we will be presenting a collection of over 30 works in differing mediums to commemorate the work of renowned mega-star, Wukun Wanambi, from Buku-Larrnggay Mulka Art Centre in the first major solo show by this artist in over 6 years.

This is not only Wukun’s first solo show in over six years, but his first solo international commercial show, and comes on the heels of two major museum shows of his larrakitj (memorial poles) at the British Museum in London (2015) and National Museum of Australia (NMA), Canberra (2014).

Several never before exhibited poles, along with a suite of other masterfully crafted gems, will adorn our new space at the Old Hill Street Police Station, including barks, foils and a video installation to engage the Singaporean audience into the world of Indigenous art and the world of saltwater country.

‘Trial Bay: Gurka’wuy’, is a collection of over 30 masterpieces produced over the last 24 months by one of the Australian Contemporary art scenes’ most collectable and sought after Indigenous artists. The masterpieces lay open the stunning country for which Wukun holds custodial responsibility. A senior lawman of the Marrakulu and Dhunili clans, he is a boisterous and infectiously happy man, whose intimate knowledge of the saltwater country in the far north eastern parts of Australia has been sought after by not only Institutional collections but also the law-makers.

The exhibition begins on Wednesday 6th January and runs until Sunday 31st January 2016, and will be opened by Wukun Wanambi in person on the Thursday 21st January, together with Mr. Richard England, Chairman of the Australian Indigenous Art Code and art-centre coordinator Kade McDonald. 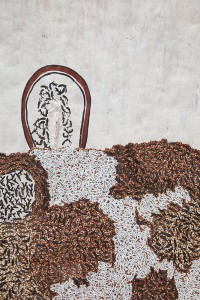