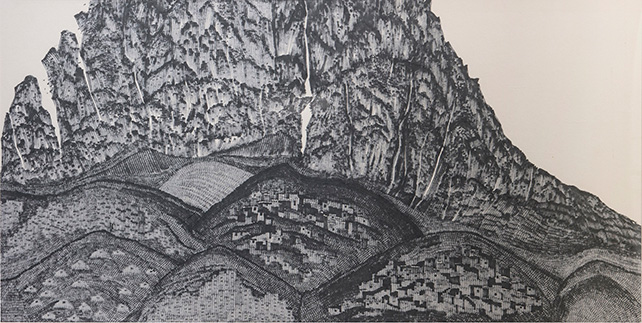 Ms Yoko Choi’s contemporary ink exhibition ‘Explorations’ reflects a period of awakening and growth in her life. It explores the notions of order and change which constantly shape and modify our world. With her observations of the relationship between nature and the man-made world, Ms Choi maps the process of change by layering thousands of repetitive strokes using permanent ink marker on Chinese rice paper, allowing her hands and eyes to surrender to her subconscious while her mind remains present in the process of art-making. The resulting collection features compositions resembling urban landscapes, mountains, oceans and imaginary space, revealing the divide between the known and the unknown, and the conscious and the subconscious.

‘Explorations’ was exhibited at the UOB Art Space uniquely @ REGAL in Hong Kong between April to June this year. The exhibition continues at the UOB Art Gallery in Raffles Place, Singapore until 8 September 2017.

Ms Choi’s winning artwork from the 2016 UOB Painting of the Year competition, ‘City Wandering’, was the design inspiration behind UOB’s limited edition Casio G-Shock and Baby-G watches that the Bank sold to UOB employees to raise funds for children with special needs, as part of the UOB Heartbeat fundraising effort.