You Can Tell Me: Marla Bendini and Victoria Cantons Duo Exhibition 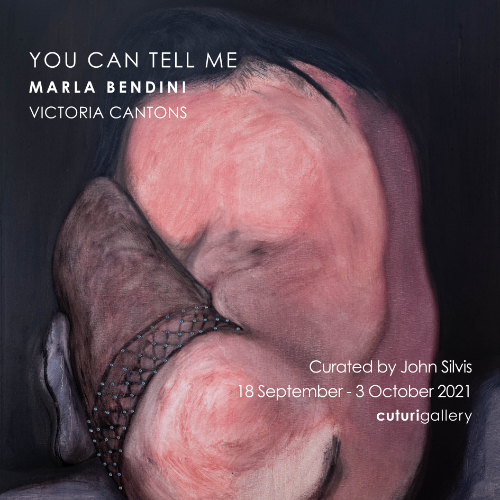 The exhibition You Can Tell Me, at Cuturi Gallery, Singapore, features two painters, Marla Bendini (b. 1986, Singapore) and Victoria Cantons (b. 1969, UK), who both deliver on these cultural aspirations by presenting deeply personal and relevant artworks that move the needle forward regarding the conversation around gender. Although each artist is operating in their own unique cultural arena, they are symbiotically engaging with the historicity of the female gaze in painting. For millennia the female body has been the object of consumption in art and literature, a malleable subject seen mostly through an almost exclusively masculine lens. Profound discussions within the intellectual discourse surrounding the power of the female psyche have transformed societal norms on a global scale. However, achieving this equilibrium in the art world is far from accomplished; and there is still much work to be done in expanding the embrace of gender identity as spectral reality in contemporary art.

Positioning Cantons and Bendini in the current feminist discourse expands the commentary on the urgency of critical feminist theory to include women of diverse racial, cultural and sexual backgrounds. The term intersectionality has been used in reference to overlooked corners of society, and cutting edge theorists, such as Paul Preciado, envision an evolution of society that will champion a non-binary gender regime. The term transgender has historically referred to people who defy prescribed societal frameworks regarding gender. And yet, as we open up our understanding of gender in all its forms, the term will hopefully represent an immensely inclusive ecosystem that nurtures all of its participants.

You Can Tell Me will be on view at Cuturi Gallery from 18 September to 3 October 2021. Opening Day on 18th September from 12 to 7 pm. Admission is free.