Born in Guangdong, Lim became a Singaporean at the tender age of twelve. However, a sabbatical retreat to Shao Xing in his later years proved to be a breakthrough in his artistic journey. The exhibition showcases his extensive landscape works ranging from China’s ancient villages to Singapore’s modern city.

Lim’s romantic paintings of China depict the peaceful, slow pace of life in rural villages, depicting a laidback mood not common in modern cities, whereas his paintings of Singapore show popular tourist spots, such as the merlion statue along the Singapore River, and the Marina Bay Sands, with multi coloured lights sparkling in stark contrast against the night sky.
The exposure to both cultures influences his distinctive art style. With gentle brushstrokes the artist infuses Chinese Ink into a modern Singaporean context. Lim is well known for using a wide and vivid spectrum of colours in his paintings, especially in his night scene depictions, which therefore sets him apart from the usual traditional Chinese Ink practice.
As a youth, Lim was inspired by his father, Mr Lim Kok Yong, a well-known calligrapher in China. His first encounter with Chinese Ink occurred when his father collaborated with a famous Chinese Ink painter, Zhao Shao Ang. Richard received guidance about the use of Chinese Ink from Zhao, and it left a strong impact on him. As he continues his journey as an artist, he explored several different mediums and material, but ultimately found himself strongly captivated by the versatility of Chinese Ink.

Even now, the influence of Chinese calligraphy and Chinese culture on Lim’s art is obvious. Fine flowing lines snaking across paper betray the masterful control Lim has over his brush, each stroke dancing lightly and gracefully under a smooth and steady hand. Lim’s masterful precision and meticulousness are testimonials to his dedication and passion as an artist. 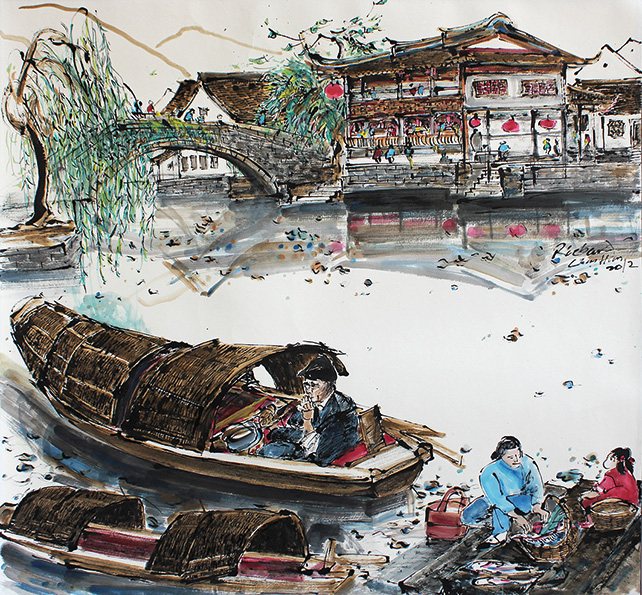