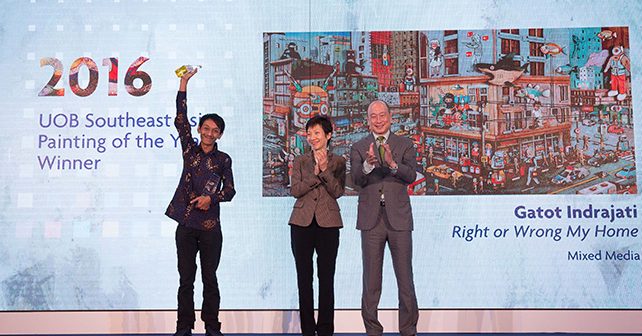 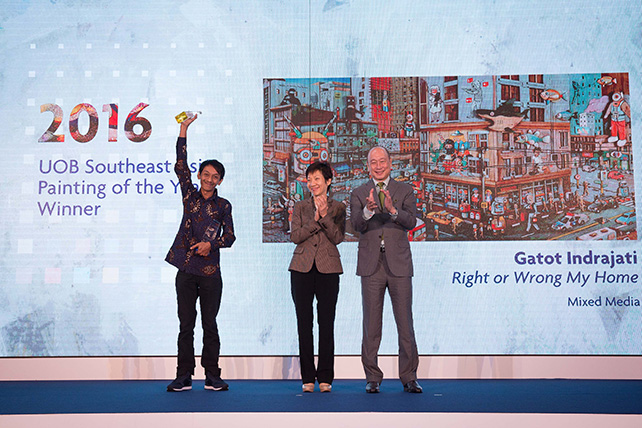 ‘Right or Wrong My Home’, the 36-year-old artist’s winning relief acrylic painting, resonated strongly with a panel of established industry experts from Southeast Asia. The judges commended his innovative use of wood, a medium for traditional art in Indonesia, and paint to create a visually compelling and contemporary art work. They observed Mr Indrajati’s intelligent treatment of composition and layering to create range of perspective in the painting which emphasised a sense of space while reflecting a typical Southeast Asian cityscape. The judges further noted that his application of light-hearted iconography invites the audience to contemplate the artist’s intent behind the visual elements.

Established Artist Category: Mr Carey Ngai wins UOB Painting of the Year (Singapore) Award
Mr Carey Ngai, 49, was presented the Singapore 2016 UOB Painting of the Year award for his oil on canvas painting titled ‘Industry 2.0 III’. The judges were impressed by Mr Ngai’s use of shades and colours in his realistic art piece. His painting draws a parallel between the obsolescence of industrial machinery and that of human abilities as societies evolve and as artificial intelligence becomes integrated into daily life.

The winning paintings from the 2016 Painting of the Year competition will be exhibited at the UOB Art Gallery, UOB Plaza 1 at 80 Raffles Place. The exhibition will run from 11 November 2016 to the end of February 2017.