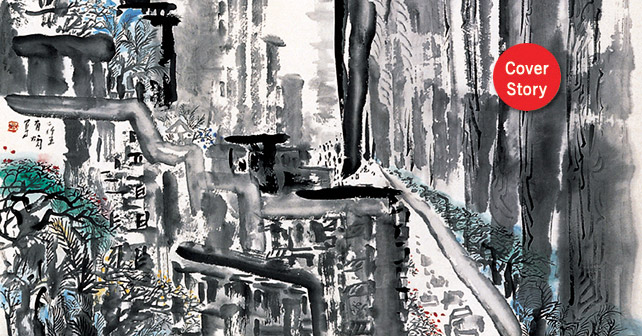 In October, Sky One Art Gallery, which is dedicated to showcasing the work of internationally renowned Singaporean artist Tan Oe Pang, will present a series of ink paintings under the title ‘Cityscapes – Religion Liberty’.

The exhibition highlights one of Tan’s trademark qualities, his ability to marry with deft skill the art of Chinese ink painting, most often associated with natural or traditional motifs, with bold and contemporary themes, in this case, images of the hustle and bustle of urban life.

Born and raised in Singapore, since childhood Tan felt a strong connection to and influence from Chinese culture. At the age of 13, he became a student under renowned Chinese ink artist Fan Chang Qien, a formation that had a strong influence on his artistic development. Tan’s sophisticated talents granted him recognition and fame at a young age. But never content to rest on his laurels, over the decades he has persevered in sharpening his artistic talents and advancing himself intellectually. He is an avid reader, with a particular love for the poems of Tao Qia, Emerson, Shakespeare and Goethe. In these literary classics, Tan finds profound inspiration from which he draws direction for his own artistic expression; as he puts it, following “the principle of ‘returning to the fundamental truths of being’, a conception of finesse and elegance”.

Tan Oe Pang is well-known for his daring use of traditional Chinese ink and vibrant compositions. Sky One Art describes Tan’s pliant strokes as enabling a smelting of ‘alien’ artistic elements – the traditional Chinese ink style and contemporary art and thematic inspiration – a skill that places him above other Chinese artists who falter in their attempts to depict contemporary personages and landscapes using Chinese ink and brush techniques. Tan’s success, perhaps, stems from his versatility and synergism, derived from the depth and range of his artistic and intellectual explorations.

Through his unique skills, Tan’s compositions come alive in his boisterous city landscapes. In the work ‘Trail of Dragon’, which graces this issue’s cover, elements of the busy metropolis jostle for space, competing for attention in a game where even solid buildings and the monumental highway looming overhead seem organic and alive, indeed like a dragon making its way through the city, rather than rooted or static. But then in contrast to this frenetic canvas, other cityscapes present a more contemplative vision of the urban environment.

Tan is one of Singapore’s most celebrated and talented contemporary artists, and his works enjoy the attention of collectors around the world. Indeed, one of his paintings recently set a new personal record for the artist at the Christie’s Shanghai Spring Auction this year, marking both a high point in Tan’s solid career as well as a high water mark for Southeast Asian and Chinese artists in general on the international art market.

Tan has exhibited widely, including in Brazil, Chile, Germany, Holland, Scotland, South Korea, Taiwan and the US. He has participated in several international Biennials since the mid-1980s onwards and has been featured in prominent artistic publications. Long celebrated abroad, Tan is slowly receiving the recognition he deserves in Singapore. In 2011, twenty of his ink and oil paintings were donated to Singapore’s National Art Gallery. The Gallery by Sky One Art also marks an important local platform for the artist, offering an impressive and rotating collection of his works on permanent display.