Art Stage Singapore 2017 closed its seventh edition on Sunday, 15 January. The Fair saw a significant presence of regional collectors, which largely contributed to the major sales made at the Vernissage on 11 January and over the next four days from 12 January to 15 January 2017. The support and presence of the collectors from Southeast Asia, especially Indonesia, increased significantly compared to previous editions, demonstrating that Art Stage Singapore’s efforts to match-make the region’s different arts scenes have shown positive results. On the other hand, despite the show of commitment by six leading Singapore-based collectors in opening their collections to the public at the Collectors’ Stage exhibition, local interest and engagement unfortunately did not correspond with international interest. 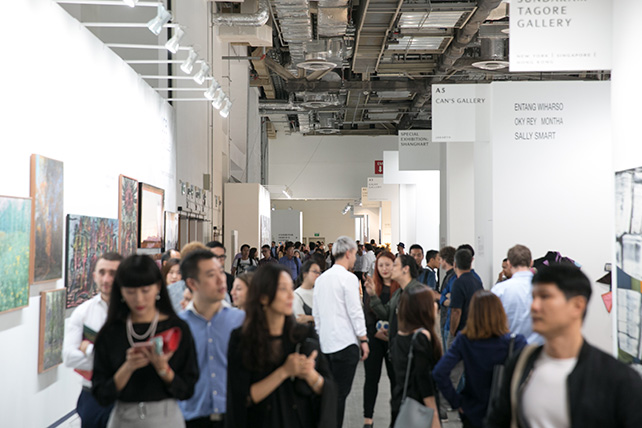 Works by Indonesian artist Rudi Mantofani presented by Singapore’s Gajah Gallery were snapped up by a regional collector for S$280,000 within 15 minutes of the Fair’s VIP Preview on 11 January. Art Agenda, S.E.A sold a work by Singaporean artist Cheong Soo Pieng for S$150,000. STPI sold a work by Rirkrit Tiravanija for USD$80,000 and reported sales of works by Singaporean artist Han Sai Por for between S$10,000 to S$40,000. Sullivan + Strumpf did well with their emerging Indonesian artist Irfan Hendrian as well as with Australian artist Karen Black. Singapore’s FOST Gallery reported successful sales of the entire series Being Together by Singaporean artist John Clang. Richard Koh Fine Art performed well with their Malaysian artists such as Anne Samat, Haffendi Anuar and Yeoh Choo Kuan who had a sell-­out of his works at the Fair. Several emerging galleries at the Fair also made successful sales with their roster of upcoming artists.