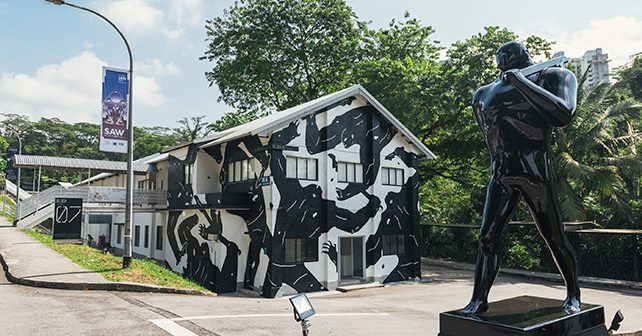 Curated by Khairuddin Hori, Gillman Barracks’ public art showcase LOCK ROUTE takes inspiration from the location’s address and the 24km long route march common in the training of ‘graduating’ army recruits in Singapore, harking back to Gillman Barracks’ history of being a former military barracks.

LOCK ROUTE features 16 arresting outdoor artworks by 15 world-renowned and emerging international and Singapore artists, including several new commissions. The artworks consist of site-specific installations, sculptures and murals, and visitors are invited to traverse the grounds of Gillman Barracks and experience a closer encounter with art out in the open.

Notable artworks include a mural ‘Land of Shadows’ by Los Angeles-based artist Cleon Peterson and the sculpture ‘Constellation of One’ by Kirsten Berg, a contributing artist of the Burning Man Festival. 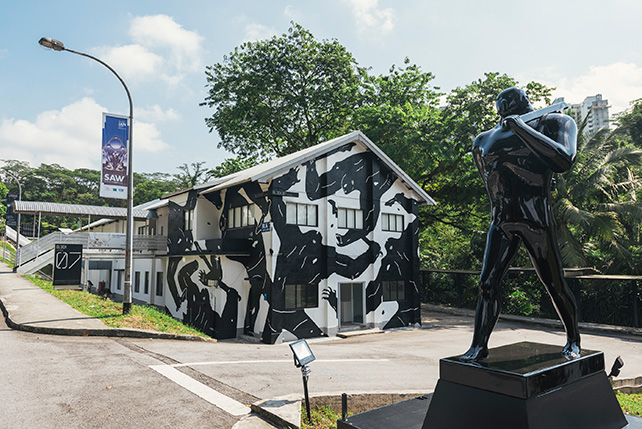 Cleon Peterson, Land of Shadows, 2016, Acrylic and spray paint
Cleon Peterson, The Marcher, 2016, Fiberglass and lacquer paint
With an aesthetic rooted in graphic design and a style reminiscent of Greco-Roman vases, Cleon Peterson’s art depicts a world in which deviance is the norm and violence, sex, and drugs bring a hollow pleasure. As a reaction to the world we live in, his works constantly contemplate the relationships between race, power and religion. Peterson acknowledges the motivations for war and justifications for punishment lie deep within us as a social impulse, that recognising and understanding humanity’s inherent darkness is important in creating empathy for the “other” where both the victim and perpetrator’s perspectives are examined. 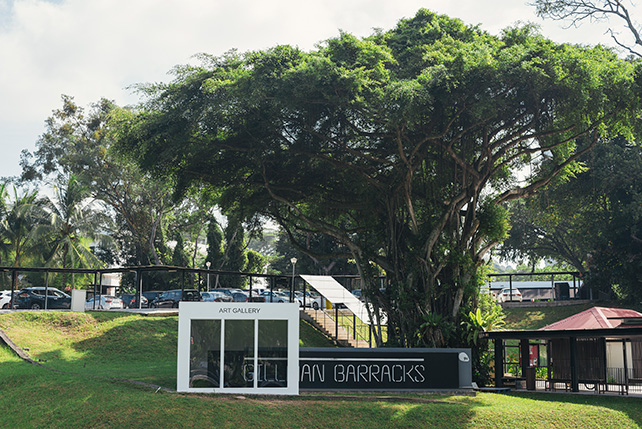 Benedetto Bufalino, Art Gallery, 2017, Mixed media, site-specific construction
First erected in 2015 as part of a collateral event of the 13th Lyon Biennale, Art Gallery inverts the usual process of exhibiting. Here, instead of bringing an object to the gallery, the gallery is built around the object itself. Where it featured an existing rock in its first iteration at Jutard’s Square, today, it is the Gillman Barracks landmark sign, otherwise ordinary and of insignificant artistic value, receives its turn for an ‘exhibitionistic’ boost. Art Gallery invites us to evaluate our perception of value and to step forward for a closer look to what we are indifferent to in place of the grandiose. 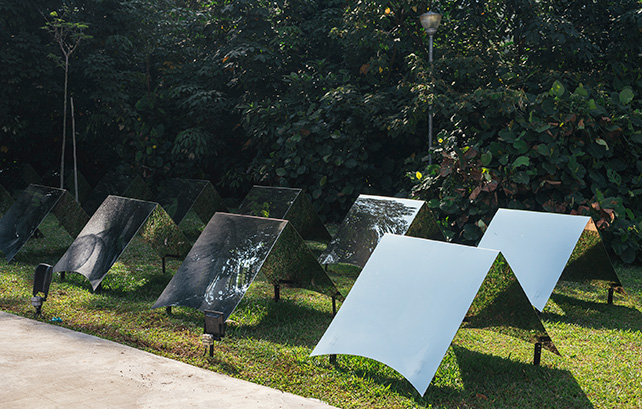 Gerald Leow, Basha, 2017, Mirror polished stainless steel
Evocative of the minimalist nylon basha or tent used by soldiers and campers in tropical landscapes, Leow’s Basha mirrors and camouflages itself into the landscape it is surrounded by. Its pointed structure recalls and repeats the most basic silhouette of universal drawing and symbol of a roofed dwelling. Tracing its origins from the Malay word meaning shelter, basha entered the British Army’s lexicon in the 1950s and have been used since then in the field by the British, Australian, New Zealand and Singaporean armed forces. 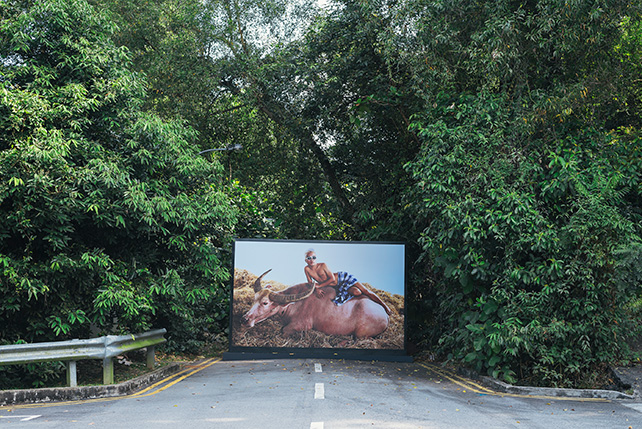 Maitree Siriboon, Dream of Beyond Part 2, 2010, Photograph adapted for lightbox
Siriboon’s work is heavily influenced by his personal identification with Isarn cultures of North Eastern Thailand. Transforming half-forgotten snapshots of memories, childhood experiences permeate his art through background of landscapes filled with the rural and romantic. Dream of Beyond juxtaposes the grown-up city dweller against a pink-hued albino buffalo, layering a subdued symbol of control and rootedness amidst personal achievements and change. 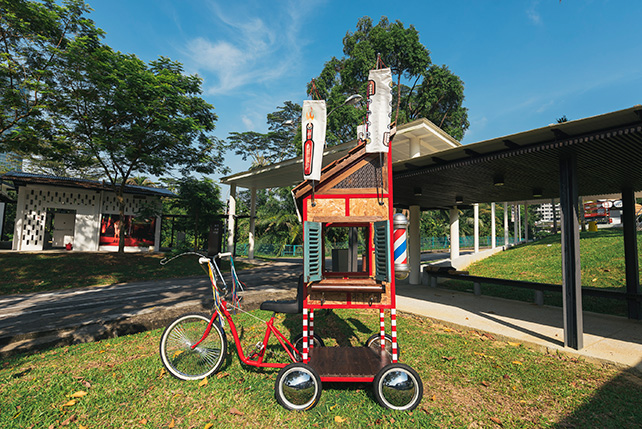 Indieguerillas, Goyang Cukur, 2015, Mixed media
Makeshift or elaborate, you choose what to make of this sculpture that doubles as a ‘mobile’ barber’s shed. Titled cheekily, like names for signature and often sexy, Indonesian ‘dangdut’ dance, goyang or ‘the boogie’ alludes to compromises and negotiations one makes when committing to a haircut while sitting on a rocking stool in this offbeat sculpture. Accessorised with motifs and materials such as Javanese roof tiles, wind socks, and wayang kulit like puppets featuring art icons such as Andy Warhol and Heri Dono, Goyang Cukur remixes and eccentric-ise the premises of the traditional Indonesian barbers who in the past would operate fuss-free under shady trees.